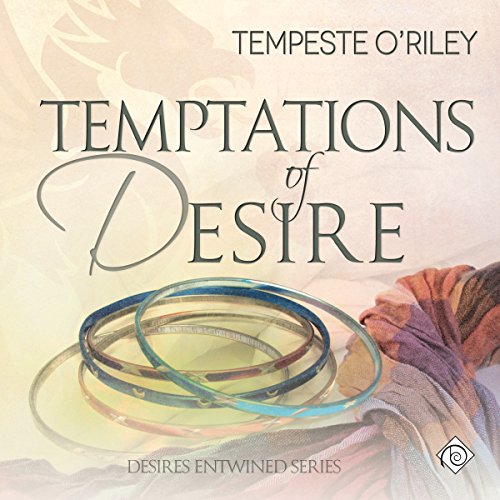 Alexander James Noble is a gender-fluid gay man who gave up on finding Mister Right a long time ago. He's not asking for much, though. He just wants a guy who loves all of him and appreciates his feminine form too.

At the local LGBTQ center where Alex regularly volunteers, he meets Dal Sayer, an officer of the Milwaukee PD. Because he's been rejected one too many times, Alex doesn't trust the huge cop and the interest he shows in him, but once Dal sets his mind on something, he goes all out. Pushing aside his preconceived notions, Alex opens up just a little and soon caves.

From their first date - while dealing with his father's failing health and his parents' demands for him to settle down and have children - Dal never takes his eyes off his goal of making Alex his. But proving to Alex he isn't like all the men who couldn't see him for who he truly was and only wanted to hide him away is harder than he thought.

What listeners say about Temptations of Desire

The subject of gender-fluid was a nice concept

Yes unfortunately as with the other books in the series it often breaks off almost mid-sentence and then starts the next chapter. Interrupts with the flow of the book the characters needed a lot more depth to them as well. It was nice to catch up with the characters in the previous books. Alex's sister arrives unexpectedly with no real explanation as to why several years has gone by with no contact?
I found this a bit far-fetched for the author to not explain the reasoning behind this. The gender-fluid aspects of the story was well written. I didn't like the narrator, the use of different voices for the characters very irritating especially Dals parents. The blurb of the book gives the listeners a good understanding of what the story is about.

The most interesting part for me was reading about somebody who identifies as gender-fluid. Unfortunately the least interesting thing was the book in general.

Was Temptations of Desire worth the listening time?

Least favorite of the series

This was my least favorite so far. It’s not that I didn’t love Alex and Dal it was the entire BS that Dal’s parents keep trying to force him into this stupid marry a nice girl and have kids. That entire thing took away from their story. I hated it. Also, I would have liked the rescuing of Chase from Dal’s POV and seeing what led up to him getting shot.

I LOVED Alex and his own unique gender identity and how easily Dal accepted and went with it. It seemed to really flow. I was, however, concerned that nobody – even Alex and his twin – seemed to really find a pronoun that was comfortable for use. I think “they/them” would be appropriate here as when Alex was Lexi the pronoun “he” was still used and when listening to this and hearing the very feminine sounding voice being called “him” was somewhat off-putting.

I was also a bit confused about Dal’s family situation. It never made sense how it could be ok for one brother to be gay but not the other.

However, I really liked these two as a couple and in general I liked their story a bit more than Rhys’.

I had the same complaints with the narrator as in book two. He did a great job with giving Lexi/Alex a high, somewhat gender neutral voice and then giving Dal a lovely deep voice. The sound quality and editing were good. But my main issue is that Jeff Gelder sounded very monotone and stilted throughout much of the book and it wasn’t my favorite of his narrations.