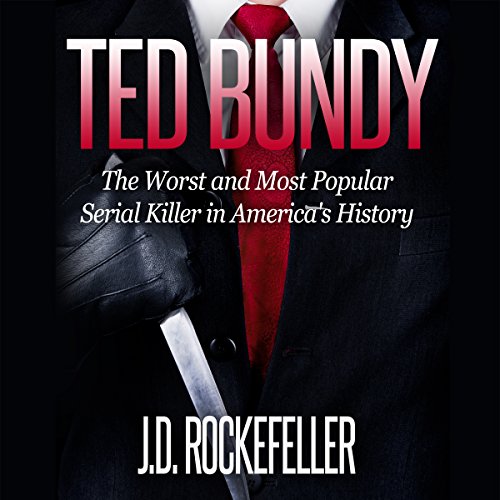 Ted Bundy: The Worst and Most Popular Serial Killer in America's History

By: J. D. Rockefeller
Narrated by: Millian Quinteros
Try for £0.00

Whether you hate him or just feel disgusted with him, the fact is that Ted Bundy remains one of the most discussed serial killers even 27 years after his execution. Even now, anything even remotely connected to Bundy makes headlines.

Bundy may have been charged for the murders of 36 women, but most people know that the count of his victims is actually higher than 100. He may have been executed in 1989 in an electric chair, but his charm, intelligence, and communication skills made him a celebrity not only during his trial, but even many years after his death.

So, who was Ted Bundy? What was his childhood like? What happened that turned him into America's worst cold-blooded killer? Did he ever get married? Did he have a family? How many people did he kill? How was he caught? What happened during the trial? Despite his crimes, why is he such a popular figure? What movies or TV shows featured him as a character?

What listeners say about Ted Bundy: The Worst and Most Popular Serial Killer in America's History

I have read and heard a lot information about Ted Bundy each time I discovered something new.

An excellent biography of Ted Bundy.

The book is well researched and the speaker reads clearly and precisely, I oved hearing this fast, exciting biography.