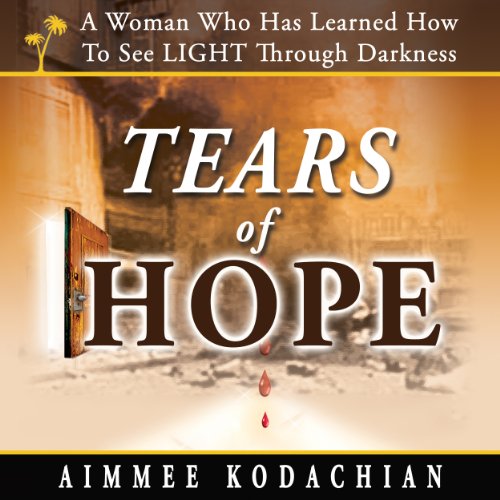 Tears of Hope is the riveting story of a Middle Eastern woman who recounts the tragedy after tragedy she has experienced throughout her lifetime. War. Poverty. Escaping death three times. Burying 13 close family members by the age of 26. Sexual and physical child abuse. Neglect. Fourth-grade education. Severe Dyslexia. Marriage at 14. Motherhood at 15. Psychological and emotional abuse. Domestic violence. Single motherhood. Immigration. Culture shock. Bankruptcy. Fighting for her teenage daughter. Becoming a grandmother at 32. Dealing with her mother's breast cancer. Any one of these tragedies or struggles could easily cripple a person.

So how did one woman manage to not only survive all of these misfortunes but also overcome them to establish a happy marriage, develop a business, and become a United States citizen? Although it's against Middle Eastern culture to open up about such intimate, personal matters, this audiobook was created in an effort to help others realize that it is possible to overcome life's greatest challenges - no matter how hopeless a situation may appear - when you keep hope alive.

Tears of Hope donates one dollar from every sale to war victims, dyslexia education, and women and children in need.

Well done Aimmee what a journey you've been on. Most people would have given up or lost their minds but you carved out an amazing life out of the darkness. Anyone reading this book will be saying to themselves 'so what's your excuse'. You are an inspiration and beautiful from the inside out. Well written, page turner and easy to read. Well done you should be very proud of this book.

I liked the honesty. This book is like a flag for the strength and resilience of the human spirit and the power of forgiveness.

Many listeners will find different messages but all messages are of hope and faith.

It was well presented though I had it on double speed because I really wanted to hear it in one sitting.

I rarely read a book twice but this is one book that I may come back to more than twice.

As a true story it is not relevant to discuss character development but I could easily relate to and picture every participant.