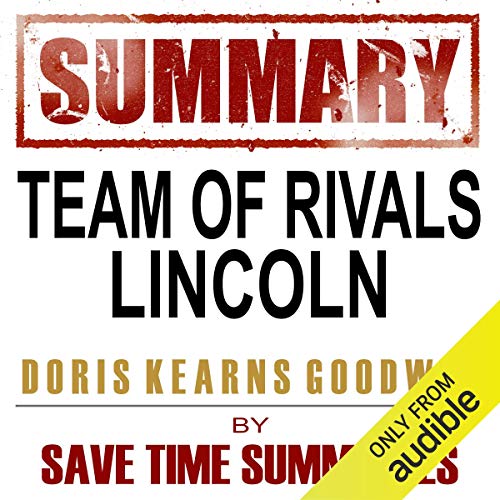 Team of Rivals: The Political Genius of Abraham Lincoln by Doris Kearns Goodwin

Team of Rivals: The Political Genius of Abraham Lincoln by Doris Kearns Goodwin

By: Save Time Summaries
Narrated by: Michael Sears

This is not the actual audiobook, Team of Rivals: The Political Genius of Abraham Lincoln, written by Doris Kearns Goodwin. If you are in search of the full and complete copy of Goodwin's highly informative and enlightening book, it can be located on the Amazon search page.

Instead, we have already read Team of Rivals and have pulled out some of the best insights and key events of the book to give you a comprehensive, chapter-by-chapter analysis and summary. Our limited amount of space prevents us from providing you with all of the important events and interesting information packed into Doris Kearns Goodwin's incredible book. To receive the full scope of this fascinating historical story, you should order the complete book.

Packaged together in an engaging format, this concise summary best serves as an unofficial study guide and companion to listen to alongside Team of Rivals. Renowned presidential historian Doris Kearns Goodwin travels back in time and reaches into the mind of one who many historians rate as America's greatest president. Follow the thoughts and ideas of this great man from the Republican nomination contest in 1860 all the way to his devastating assassination just five years later.

You might be surprised to find out that Abraham Lincoln was actually considered the underdog in the presidential election right from the start. Few even expected him to win the Republican nomination. In this summary and analysis, you will also learn how Abraham Lincoln faced a variety of obstacles in his rise to the presidency. His upbringing and background drastically differed from those of his opponents in the presidential race. Discover how he overcame numerous obstacles to rise to the esteemed title of President of the United States.

Lincoln served only one term in Congress more than ten years before receiving the Republican Party's nomination. Follow his political career and learn about the personal struggles he faced during this time.

Throughout the turbulent 1850s, Lincoln devoted himself to the anti-slavery movement as the Republican Party was formed. Travel back in time and delve into the thoughts and ideas that formed one of the most recognized movements in Lincoln's Presidency.

I think this shortened read/summary has finally convinced me to stop buying them outright. If I hadn’t spent only a couple bucks on it, I would return it.

It was ok but who needs cliff notes? I misread the title and wasted my money. Now I need to spend more money on thereal book.