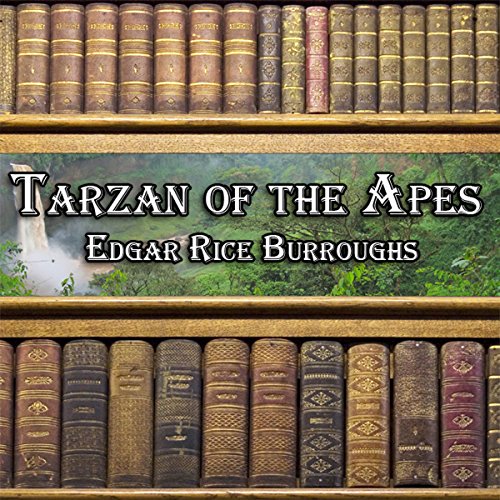 Tarzan of the Apes tells the story of John Clayton, born in the coastal jungles of Africa to John and Alice Clayton, Lord and Lady Greystoke. Adopted as an infant by the she-ape Kala after his parents died, Clayton is named "Tarzan" and raised in ignorance of his human heritage.

Feeling alienated from his peers due to their physical differences, he discovers his true parents' cabin, where he first learns of others like himself in their books, with which he eventually teaches himself to read.

On his return from one visit to the cabin, he is attacked by a huge gorilla, which he manages to kill with his father's knife, although he is terribly wounded in the struggle. As he grows up, Tarzan becomes a skilled hunter, exciting the jealousy of Kerchak, the ape leader, who finally attacks him. Tarzan kills Kerchak and takes his place as "king" of the apes.

What listeners say about Tarzan of the Apes [Alpha DVD Edition]

What a great classic!

If you could sum up Tarzan of the Apes in three words, what would they be?

What an incredible surprise! The performance was fabulous and I found it difficult to listen to at work because it was such a great story and performance! Do yourself a favor and dive into this one!

John and Alice Clayton, Lord and Lady Greystoke, are put ashore on the west coast of Africa after the crew of their vessel mutinees and kills the officers. Shortly thereafter, Alice gives birth to a bouncing baby boy. Over the course of a year, John builds a very sturdy cabin for their habitation and safety, but Alice could not cope and finally succumbed. So distraught was John that he neglected to latch the door to the cabin, allowing Kerchack, king of the great apes, easy access and spelled the end for John.
Luckily for the baby, Kala had dropped her newborn, killing it. She rapidly traded her dead baby for the crying young Lord Greystoke and raised the human as her own and named him Tarzan. So begins the life and times of Tarzan of the apes, who used his superior intellect to become king of his tribe and the most feared Hunter in all of Africa.

The Movies Do No Do It Justice

No surprise there. The ending... it left me pondering on all the other ways it could have played out (maybe I'll write a compendium of explorations). Just to note, since he wrote more than a few dozen books on the character, Cheetah was not worked into the story yet (I was looking for him, but given the book's adventures, I soon forgot about it). This book is about Tarzan's beginnings.

Tarzan of the apes(A DVD E)

Read this as a child and now I'm the age of 72, I feel the same way I did the first time controlled excited and entertained. I am so thankful for audiotape, what a blessing.

It has been 30 years since I first read this book. I still love it.

This book is interesting and exciting and very well written. Unfortunately it includes no favorable characterization of any of the black characters. It also includes many references to Superior white men. Other than that it's a great story. One black female character reminds me of the inclusion of Jar Jar Binks in the Star Wars stories. While this detracts from the overall experience it doesn't really ruin the story completely. On second thought, it was very sexist as well. Dick Hill does a perfect job of narration as usual.

a performance that will live

What made the experience of listening to Tarzan of the Apes [Alpha DVD Edition] the most enjoyable?

They say that a willing suspension of disbelief is necessary when you read any work of fiction and with this one, written in 1912, I also had to suspend some liberal biases - there are countless references to the inherent qualities of being a "white man" which seem sort of laughable when you think of the Trumps and Madoffs of the world we live in. Those moments gave my 12-year old son and I some good opportunities to pause the action and unpack the assumptions which was a valuable exercise even if it wasn't intended by the author. But the reason I rated it so highly was that it was really hard to pause the action! We've made the drive from coastal California into the Eastern Sierra many times and I can safely say this was the only time we didn't want to get out of the car when we reached our destination. Who doesn't need a bit of romance? "I too am not a bit tamed, I too am untranslatable. I sound my barbaric yawp over the rooftops of the world" - Walt Whitman

incredible book. Loved all of it. Those who do not read it will miss out on a great adventure.

Incredible book. Loved all of it. Those who do not read it will miss out on an incredible adventure.

TARZAN OF THE APES

Loved this book when I read it as a teenager love it now when it was read to me.
Dick Hill is the best.