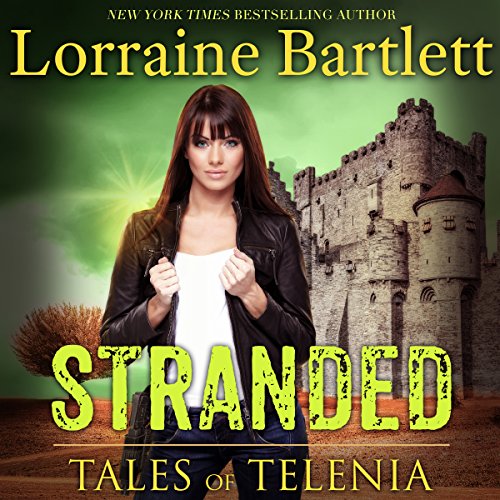 Amanda Shelton is clever, adventurous, and tough - and she's going to have to be, because she just crash landed on a world where her saviors might really be her enemies. It takes fierce determination to prevent the people of this frightening and unfamiliar place from stealing her shuttle technology, or from imprisoning her while they do it. Yet what she knows could save countless innocent lives - including those who keep this world safe. Facing this terrible test of spirit will take everything Amanda has.... If she survives at all.

What listeners say about Tales of Telenia

With friends we always discuss what kind of book they are looking for, so if this fit the parameters, then sure. A few friends are often looking for a light scifi/fantasy blend!

Would you recommend Threshold to your friends? Why or why not?

With friends we always discuss what kind of book they are looking for, so if this fit the parameters, then sure. A few friends are often looking for a light scifi/fantasy blend!

Would you listen to another book narrated by Steven Barnett?

Not particularly, though I think I'm conditioned to podcast style listening bursts. Half an hour at a time was decent.

This was an interesting tale of how Amanda crashes on some appalling planet alone – no shipmates able to survive the ordeal, leaving Amanda helpless to the whims of Prince Paxton. Coming from a time and place where Amanda’s skills and intelligence were recognised for what they are, she’s now in a place where women have no say. She eventually has to come to terms with the fact that Prince Paxton is her best chance of getting some kind of freedom, though with this comes the fact she is only of interest to him for her body and for breeding purposes – not for her intelligence.

This book is soft science fiction, with much more of a fantasy edge, especially during the parts where Amanda is marooned on the planet. Though she came there on a space ship she’s then trapped on a planet where they have zero technology, eat very basic natural foods (though no meat!), and have limited medical abilities.
Told in two parts this book opens with Amanda talking to her young son, entrancing him with The Story – one that he sees as a bedtime story, but is actually the story of how she came to be on that planet.

You really get the depth of how unfair this is for Amanda, who was a medical technician and was far more used to women having rights – this also brings to light just how close we are from a time when this insulting view of women was common place.

This is the first piece of work from Lorraine Bartlett that I’ve come across, as well as that of the narrator, for I listened to the audio version.

Thank you to Steven (narrator) for my review copy.

a fine new SF/R sure to please readers

Ms. Bartlett's new series begins with THRESHOLD. This book is both well-written and tightly plotted with believable characters and fun dialogue.. Once I began listening, I couldn't turn it off. Amanda, a med-tech from a technologically advanced Earth lands on an alien planet when her shuttle is sucked through a spacial anomaly. The part of Telenia where she regains consciousness is singularly medieval in its attitudes toward women, and Amanda is not willing to be dictated to, even by the haughty, demanding crown prince, Paxton, or maybe, especially by him. She hears stories that other districts don't have such draconian rules and is determined to escape to one of them. Prince Paxton is equally determined not to permit her departure.

Steven Barrett's presentation of this book truly enhances an already eminently enjoyable story with the versatility of voices he can produce. Never is there any doubt which character is speaking, or what that character's state of mind might be. I, for one, can't wait to listen to the rest of The Tales of Telenia.

DISCLAIMER: I was given an audible copy of this novel in exchange for an unbiased review. I am not personally acquainted with the author, though I have read and enjoyed previous books in her body of work.
JGG

This was a totally different genre for, and was enjoyable. Mr. Barnett was a pleasant reader adding excitement as needed.

Where does Threshold rank among all the audiobooks you’ve listened to so far?

Right up there. This is a light sci-fi, which I don't usually read, but Amanda is from earth, and imagine being stuck, as a prisoner on another planet.

What other book might you compare Threshold to and why?

No comparison for me because this is one of my first Sci-Fi books.

Have you listened to any of Steven Barnett’s other performances before? How does this one compare?

Yes, I love his narrations, and this one is high on my list.

Yes! But I don't have big blocks of time available to me.

You will love this book and the narrator. I love Amanda's character and I feel for her having to deal with everything brand new, including the language.

What made the experience of listening to Threshold the most enjoyable?

The reader pulling me so much into the story.


The characters are human and likable. Amanda's strength in a far away place. The orange grain, food is basic fruit and grain.

Have you listened to any of Steven Barnett’s other performances before? How does this one compare?

Teary eyed as I found myself so much into Amanda's struggle in a new far away planet.

"Stranded" Is Delightful! I Never What to Go Home!

Would you consider the audio edition of Tales of Telenia to be better than the print version?

I have come to greatly enjoy listening to stories, but am unable to compare this experience to the print version. But, the excitement provided by the narrator is often more engaging than I can muster. Although writing any review, I am afraid I may misspell something.

What other book might you compare Tales of Telenia to and why?

"Tales of Telenia: Stranded" is a great 'fish out of water' story with elements of the 1950s with women not in the workforce or positions of power. I know that I've read several stories where the character deals with conflicts due to city mouse/country mouse differences, US vs French culture shock, or having to move back in with your parents. This is a good one.

The narrator, Steven Barnett, was a surprising delight as he performed the female voices well, and after a bit, I was hooked.

It wasn't one moment. I was intrigued by the conflicts Amanda had living in a society where women were so undervalued, and even other women, were suspicious of her. Although the trip she and Wren took to capture the dangerous spider, was exciting.

The story begins six years in the future on the anniversary of her crash landing, so it was comforting to immediately be made aware that Amanda survived and has become uniquely tied to Telenia. “Tales of Telenia: Stranded,” originally titled “Threshold,” is a flashback of her struggles to survive and ensuing conflicts. The story was engaging, and although it tales place on another planet, it didn’t seem like a true science fiction. There were recognizable characters and true-to-life storyline. The end leaves several issues unresolved…I wasn’t expecting that. So Book 2 “Tales of Telenia: Journey” is a ‘must get my hands on’ deal. This audio version does provide a short teaser of Book 2 which may address some of the loose ends, but it puts Amanda in the middle of what might be described as a cultural revolution.

I liked the way the story is told to the child, a refreshing twist. The narrator has a pleasant voice and pace. I have GOT to get the second one!