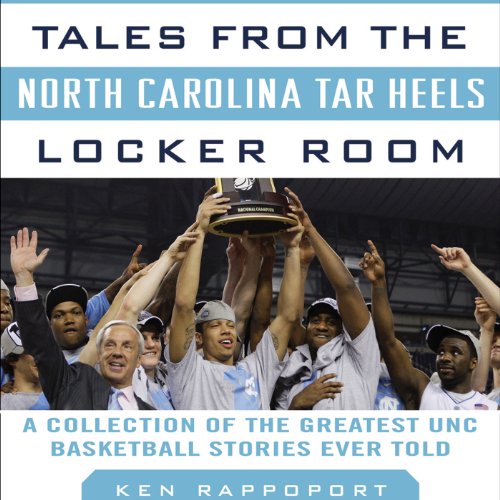 By: Ken Rappoport
Narrated by: David Marantz
Try for £0.00

From the start, Ken Rappoport sets the humorous tone of this collection by noting that the Tar Heels' first coach in the early 1900s was a man named Nat "Bloody Neck" Cartmell. Despite his gruesome nickname and missing fingers, Cartmell was so unassuming that the police refused to arrest him when he confessed to a misdeed. Narrator David Marantz follows Rappoport's lead with an upbeat performance, which he tempers with earnestness as the team deals with social issues like racism.

Fans will get a glimpse into each decade of the Tar Heels' history with anecdotes that sometimes amuse, sometimes inspire, sometimes move the heart, but always entertain.

Relive the glory of Tar Heel hoops, including the 2009 National Championship!

Ken Rappoport’s Tales from the North Carolina Tar Heels Locker Room is a compilation of the best notes, quotes, and anecdotes from North Carolina lore. Meet a coach nicknamed 'Bloody Neck', a player called 'The Blind Bomber', and a team known as the 'White Phantoms'. And, of course, there is the extraordinary Michael Jordan.

Tales from the North Carolina Tar Heels Locker Room captures the anecdotes and memories that have defined this team from the early 20th century up through their incredible success in the 2000s. A must-have for any Tar Heels fan!