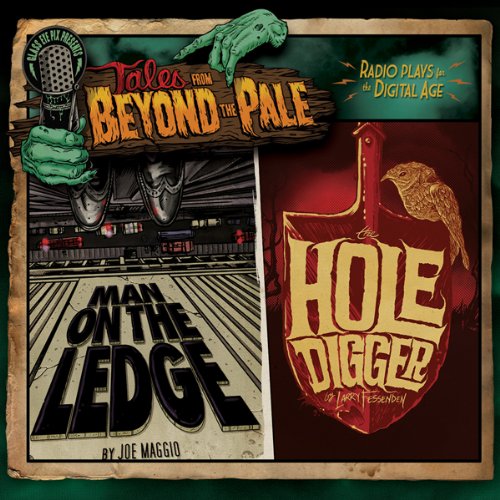 Tales from Beyond the Pale, Season One, Volume 1

Tales from Beyond the Pale, Season One, Volume 1

Conceived during a fog-drenched car ride with nothing beyond the windshield but a horizon-less void, Larry Fessenden and Glenn McQuaid created the acclaimed Tales from Beyond the Pale, audio theater inspired by the vintage radio shows of Alfred Hitchcock and Orson Welles.

Volume 1 features two episodes from the first season, including "Man on the Ledge" by Joe Maggio and "The Hole Digger" by Larry Fessenden. The series was produced by filmmakers Larry Fessenden, Glenn McQuaid, and Lisa Wisely.

In "Man on the Ledge", written and directed by Joe Maggio, a man reflects on his life - and imminent death - while perched on a ledge overlooking Manhattan. Through a series of surprising reveals, what begins as a touching soliloquy on human frailty slowly devolves into a psychotic screed as our ledge-dweller’s misdeeds are slowly brought to light. Starring Vincent D’Onofrio as the man on the ledge, with Larry Fessenden as Bill Coley, the officer charged with talking him down. Featuring John Speredakos, Nick Damici, and Greg Amici.

"The Hole Digger", written and directed by Larry Fessenden, concerns "the summer that everything changed, that summer in Cape Cod when me and my brother first found the hole dug down in the dunes in front of our house. Whether it was for a grave or a treasure, that hole changed our lives for good." Larry Fessenden’s haunting tale stars James Le Gros and Owen and Tobias Campbell, and features Kevin Corrigan, Heather Robb, and Joel Garland.

"ONE OF THE YEAR’s TOP 10. The team at Glass Eye Pix and the filmmakers they’ve assembled are very much crafting great little spookfests that remind us why we love horror storytelling in general.” ( Fangoria)
"Fans of shows from ‘A Prairie Home Companion’ to ‘This American Life’ [who] take their stylistic cues from radio’s glory days should enjoy these macabre R-rated tales." ( The New York Times)

Reaction to an unendurable:<br />no risk's over the top

There are losses whose solutions we evolve in the darkness of the of the unconcous heart.
When one's need will not be denied, honesttt ignorance begets the unintended.
A story well conceived, and written, one told at just the right pase to pull a

ADS FOR OTHER TITLES INTERRUPTING YOUR STORY?????

What would have made Tales from Beyond the Pale, Season One, Volume 1 better?

the stories are not that bad, however, right in the center of the action, comes a trailer for other titles you can purchase in the series?? really? how cheesy!! i would have probably bought all the titles if it hadn't been for this! very distracting!!!!!

What was most disappointing about Joe Maggio and Larry Fessenden ’s story?

the trailers for other titles to purchase!!!!!!

the narrators were fine

the stories were good, narrators were fine, can't get past ads for other titles in the middle of a story