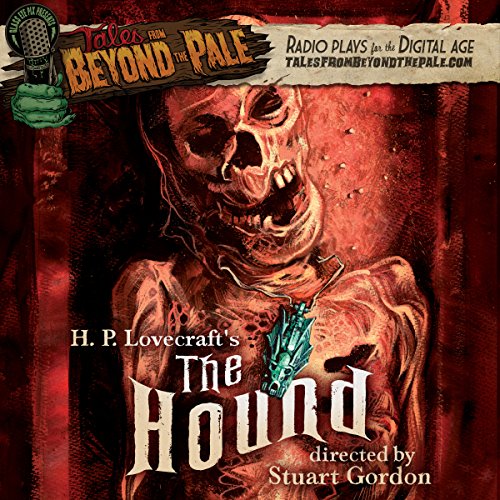 Tales from Beyond the Pale: H. P. Lovecraft's The Hound

The allure of a jade amulet proves troublesome for two aristocratic grave robbers.

Larry Fessenden and Glenn McQuaid's award-winning Tales from Beyond the Pale, now entering its sixth year, has produced over 40 audio dramas from a wide array of today's leading genre writers and directors. Season three was produced by Larry Fessenden, Glenn McQuaid, and Jenn Wexler. The full list of narrators includes Ezra Godden and Chris McKenna.

What listeners say about Tales from Beyond the Pale: H. P. Lovecraft's The Hound

Not quite what I expected...

In general it was a well preformed piece, well done voice acting, and I could hear the emotions they were trying to convey. What I did not expect however, was the additional character of Eve, who made things slightly awkward, and I find that to be putting it lightly, seeing as how, thanks to her inclusion, I ended up listening to an S&M scene. Ya, that was an experience that I'd rather not have again.
Other then that, pretty good.

Fun production, not the best story

What did you love best about Tales from Beyond the Pale: H. P. Lovecraft's The Hound?

The performance was a blast! Obviously most people that buy this will do so for the quasi reunion of Dennis Paoli, Stuart Gordon, Barbara Crampton and (possibly) Ezra Godden. The characters and gratuitous kink feels right at home with the 80's classics, The Reanimator, From Beyond and the later Dagon.,

What was most disappointing about Dennis Paoli and Stuart Gordon ’s story?

The story selection, obviously they did the best they could but this has never been a favorite Lovecraft story and this production didn't change my mind although I was quite open to it.

Everything. This is much more an audioplay, than a narration. And what sells the download for me was entirely the narrators/actors.

If you could rename Tales from Beyond the Pale: H. P. Lovecraft's The Hound, what would you call it?

Well that's the best title really, but if I had written the story idk the kinky tomb raiders get their comeuppance? Story titles shouldn't be put in my hands really...

It's really short so I'm not sure it's worth a credit, but for the two bucks or so that is the member prize it feel it's worth the prize, fairly fun for the performance even if the story itself wasn't great.

not feeling this one

a fan of h.p. lovecrafts but not this story! the only thing good about this one was the acting.