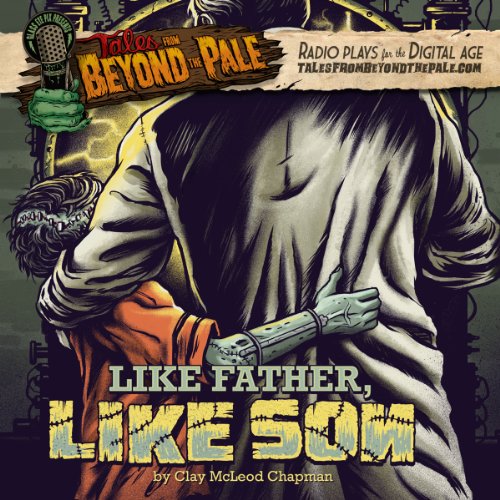 Tales Season Two delves even further beyond the pale with eight explosive tales to tickle your fancy and curdle your blood. The series is produced by filmmakers Larry Fessenden & Glenn McQuaid; Associate producers Lisa Wisely, Jenn Wexler. In "Like Father, Like Son" by Clay McLeod Chapman, a scientist loses his five year old son in a car accident after losing control of the wheel. Wracked with grief, he refuses to let his boy go - choosing to bury himself in his work instead: Reanimating human tissue. On the brink of a major breakthrough, he's determined to have a family reunion, no matter how many body parts it takes. Featuring the voice talents of Larry Fessenden, Vincent D'Onofrio, Bonnie Dennison, Joel Garland, Tobias Campbell, Brenda Cooney, and Owen Campbell.

"Fans of shows from A Prairie Home Companion to This American Life that take their stylistic cues from radio’s glory days should enjoy these macabre R-rated tales." ( The New York Times)
"The team at Glass Eye Pix and the filmmakers they’ve assembled are very much crafting great little spookfests that remind us why we love horror storytelling in general." ( Fangoria)
"Some episodes re-create pop-culture archetypes… Other episodes play with expectations of characters that seem familiar… At least half the enjoyment, though, is the colorful sound design." ( The Wall Street Journal)

I loved it. it has it's cheesy moments but overall it's the one I always show my friends.