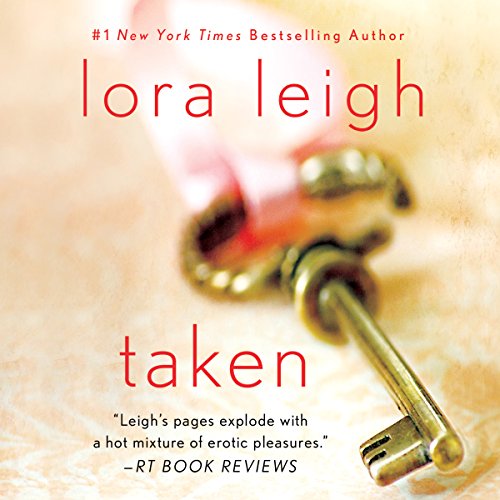 By: Lora Leigh
Narrated by: Julia Duvall
Try for £0.00

What listeners say about Taken

Completes the Tempting SEALs series and then some!

TAKEN is a compilation of 6 novellas, 3 from the Tempting SEALs series (volumes 1, 3 and 6), 1 from the Elite Ops series (very short 1.5) and 2 from the Wounded Warrior series (1 and 2-not sure if there are more). They are companions to the TS and EO series, so they might be confusing if you're not familiar with them, assuming you care about the plot line. As always, it's Lora Leigh, so if you have a problem with hot sex, kinky sex, lots of sex and alpha males who say what they mean and what they want while using raunchy language, this is not for you.

Tempting SEALs Series:
1-RENO'S CHANCE: Reno Chavez pursues Raven MacIntyre in this novella that introduces the series and precedes book 2, DANGEROUS GAMES in which Morganna (Reno's little sister) and Clint (Raven's big brother) need to work together while Clint tries to avoid his BFF's sister and his sister's BFF who has tempted him for years with her hot body and sweet disposition...sure.
3-FOR MAGGIE'S SAKE: Follow up drama in the wake of DG where we find out more about the history and future of Joe and Maggie prior to moving on to books 4 and 5 (HIDDEN AGENDAS and KILLER SECRETS) where Kell and Ian, respectively, lose their hearts to the women made for them and take the series further into the goings on of the drug-cartel-leading, torturing, murdering and sex-slaving all around bad guy, Diego Fuentes. Mwahahahaha.
6-ATLANTA HEAT: Poor Macey, the super hot computer whiz, is not about to be the left single and happily bachelorified if Emerson, the Admiral's goddaughter, has anything to say about it. This novella rounds out the end of the TS series while leaving the evolution of the team and their families open for more exciting opportunities for further adventure.

Enter Elite Ops Series:
It all starts with book 1, WILD CARD, where we witness the destruction from the demons of Nathan Malone/Noah Blake in the aftermath of his torture by Fuentes and the hard road back to the light with the help of a good woman. We also are introduced to a new team of "dead men" which is partially comprised of and backed up by our old friends, the Durango Team, from the TS series above.
1.5-NIGHT HAWK is more of a prologue to book 2, MAVERICK, where the past comes back to haunt the teams when one of Diego's kidnap victims from the past is targeted again.
As of this review, books 3, 4 and 5 and novella 6 (HEAT SEEKER, BLACK JACK, RENEGADE and HANNAH'S LUCK) are not available on Audible, and this makes me very, very sad. However, the final book- 7 LIVE WIRE, in which Jordan Malone finally accepts he has met his match is available now. mm-hmm

Wounded Warriors:
1-Cooper's Fall and 2-Sheila's Passion are both set in Texas and involve ex-military men but have no crossover to TS or EO. Still, they're entertaining short stories and worth the listen.

The narrator is different than in the full novels, so the voices are not the same, but I think she did a decent job--no glaring problems I remember but also no praises to sing. My preference for the other narrator is most likely that I am more used to her than that JD was lacking in any way.

Definitely worth a credit-12 hours of solid entertainment. It is SO great to have these tie-ins to the series in one book and DEFINITELY nice that I don't have to cough up a credit or cash for each short story. Hopefully, this will become a trend and other series that have shorties will combine them like this. Now, I will wait/hope for the missing Elite Ops books to be produced quickly so I can listen to them in order.

Black jack starts but the story ends before the first chapter begins. Def a prob with the taping of it

What made the experience of listening to Taken the most enjoyable?

The Prologue of Black Jack was here... but nothing else... What happened?

Fantastic books even though most of "Black Jack" was missing!