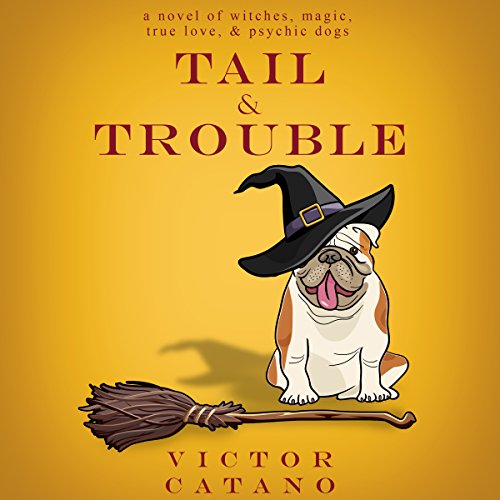 When Gabriel's witch girlfriend doesn't return from her latest trip, he gets on the road and heads out to find her. Sheila's coven is secretive and distrustful of Gabriel, so the only help he has is Sheila's familiar, a bulldog named Orson, who is psychically linked to both of them.

In Florida, they walk right into an elaborate plan to steal Orson. A mysterious wizard named Yareth is behind the plot, and he may also know where Sheila is.

Gabriel and Orson will have to fight for their lives as they navigate around all the magical roadblocks to force Yareth's hand. They won't give up until Sheila is safe.

What listeners say about Tail and Trouble

‘Orson is a lot more charming than the two of you.’

I am a cat person, truly. They maintain themselves better than dogs. My cats don’t demand attention or walks; they want a clean litter box, wet cat food on a clean plate each day, a new water bowl to drink, a couple inches of water in a sink to clean their paws after they do their business, and fresh dry food daily. Yet the only cat books I can find are connected to newly awakened witches who are more dimwitted than Alicia Silverstone in Clueless (who actually grows during the movie) or Legally Blonde’s Reese Witherspoon (who is adorable, not snarky or bytchy) and not nearly as likable as the mentioned actresses.
So this is why I end up listening and reviewing books with dogs as main characters.

Tail & Trouble’s Orson is a familiar, yet a bulldog, who belongs to Sheila, a witch. Her coven members aren’t impressive and even her mom wasn’t concerned with Sheila’s disappearance. Which leads the listener/reader to conclude they’re involved because the alternative is it’s bad writing or poor planning, which this book clearly had a good outline and editor. It’s evident even at ten minutes in. So we hold on for the ride.
Told from Gabriel’s first person POV, we learn things through his actions and level of reasoning. He’s an impressive ‘perfect’ boyfriend who loves Sheila (he succumbed to her demand to live without a cell phone, but his constant reminders got old) and they seem to have a good, solid relationship. He gives her room and freedom and it’s based on mutual respect, trust, and freedom.
Written with some adult colorful remarks and side notes, teens (high school age) and NA could appreciate the writing as well as older audiences for a fun, lively missing person paranormal mystery.
I thoroughly enjoyed this pychic talking dog and his step-parent’s adventure! Although I didn’t ever want to “pause” it, it was easy to step away and pick up where I left off whenever I needed to.
Unfortunately, I don’t see any other interesting books written by Victor Catano nor narrated books by Michael Sears. This was a blend of remarkable story telling and delivery. It would be cherished by anyone who wants a unique paranormal with fun yet unsnarky idiotic characters (what’s up with so many paranormals having the same characteristics in their casting, anyway?) and a mystery/plot that leads to something bigger, yet not a sinister apocalyptic cataclysmic event.
It’s an Undiscovered Gem that deserves more attention. A full length cozy of a higher caliber, putting most others to shame.

I found the characters to be engaging and the story fast paced. I thoroughly enjoyed it.

a quick fun listen. narration voices need work, particularly the primary negative male character, that voice kept taking me away from the story, reminding me that this was a performance..

What would have made Tail and Trouble better?

Shorten it. The story dragged out WAY to long,

Would you ever listen to anything by Victor Catano again?

Would you be willing to try another one of Michael Sears’s performances?

No. l don't think he made the voices different enough from his own.

If you could play editor, what scene or scenes would you have cut from Tail and Trouble?

Shorten the search part or at least add more interesting events in it.

When I listened to the sample before buying, I was excited to get a book with a snarky talking dog like Jim in the Katie McAlister Green Dragon series (and the others that followed it. Jim was enough to make me want to read every book. I did like the Orson character in this but the whole story dragged out way too long, I read up to chapter 27 of 45 and realized I just couldn't finish the book. 45 chapters is at least 15 chapters too many in this book.

This story is just a creative, fun, cute and entertaining. It's the perfect book for those days you just want something light-hearted with a little humor that is still an interesting, engaging and enjoyable story. It pulls you immediately and keeps you listening until the end. I listened to this book on a road trip and it made the time fly by.

Gabriel and Orson must connect the dots and weave their way through various situations and people in their quest to find Sheila, Gabriel's missing girlfriend and Orson's owner.

Michael Sears did a fantastic job with the narration. This is one of those books that needed to have the perfect narrator or it would ruin the story. Michael Sears was that narrator. Nice voice. Easy to listen to for long periods of time. Clearly spoken with a nice even pace. Really good character voices. All of them. Even the female voices. His voice for Orson was perfect. He brought all the characters and story to life through his narration. Very enjoyable.

I was provided this free review copy audiobook by the author, narrator or publisher.

What can I say I love a good story with a dog as one of the main characters. Well not usually but in this book it just works. Part mystery part adventure and a whole lot of dog treats with a road trip throw in and this book takes you for a terrific ride. All fantasy of course not too much language, no crazy sex scenes. Just a lovable dog in search of his missing "mama" and her boyfriend. Oh and yah the dog happens to be able to talk. Received this book at no charge in exchange for an honest review. Loved the dog!

This was a quick and entertaining book. Narrator was really good with the main character, thought he struggled with some of the accents, and wasn't too crazy about the dogs voice. The story had some weak spots, mainly with character interaction. This is an easy listen, not an overly serious novel, but a nice listen in the car.

Magic bulldog made my day

And here we have another story of a young Afghanistan vet, trying to find his way in the world again and stumbling upon magic. It's about a third one with this theme I've read so far and as the previous ones (from different authors) it's a very nice read!

Gabriel is going to take you (and Orson the magic bulldog) on an adventure to find and rescue his girlfriend. It's a fun story, told in a light manner. I liked the tone and the characters a lot - especially Orson. Michael Sears does a brilliant job with Orson's voice. His "Mamaaaaa" is just perfect :D

Listen to this tale. Trust me, you won't regret the time with this book. I hope there is a sequel in the works.

My heartfelt thanks to the author, narrator, or publisher for providing me this audiobook via Audiobook Boom at no cost in exchange for my unbiased review.

I received this book free from ebalst, and this is my unbiased opion. Good story, enjoyable characters. I liked the dog. definitely worth a listen.

If you could sum up Tail and Trouble in three words, what would they be?

The dog and him always saying "Mama"

The narrator really brought this book to life. I wouldn't mind seeing a 2nd book as a follow up to the characters and how everything turned out in the future. This audiobook was provided by the author, narrator, or publisher at no cost in exchange for an unbiased review courtesy of AudiobookBoom