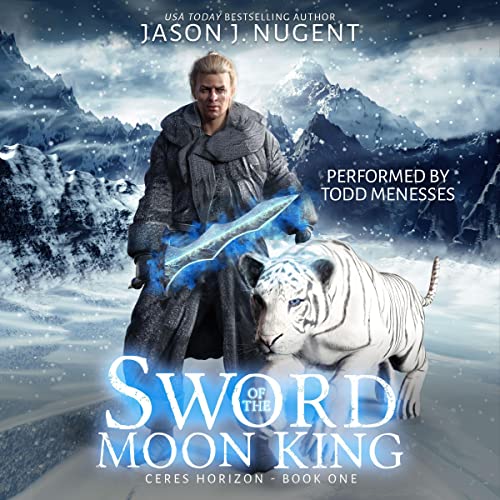 Sword of the Moon King - A Gamelit/LitRPG Fantasy Adventure

By: Jason J. Nugent
Narrated by: Todd Menesses
Try for £0.00

A massive spaceship. A promise of loot. But there’s a catch in this adventurous fantasy world...

Eighteen-year-old gamer Caleb Whitson is out of options. With his mother’s health growing worse and money running out, he signs up for a once-in-a-lifetime mission to space where he’ll play an immersive video game called Sword of the Moon King while traveling across the stars, headed for a mining mission on the dwarf planet Ceres.

Once inside the fantasy game, he soon discovers the Ceres Horizon Mining Company is not what it appears to be.

Messages indicating his mother’s worsening health compel Caleb to find his way out of the game for one last desperate attempt to contact home. The only problem: How do you leave the game?

Fighting other players and forging ahead with the quest of his life, Caleb must fight horrific dangers in a daring struggle to free himself.

But if he succeeds, a new problem awaits...and it may not be one he can overcome.