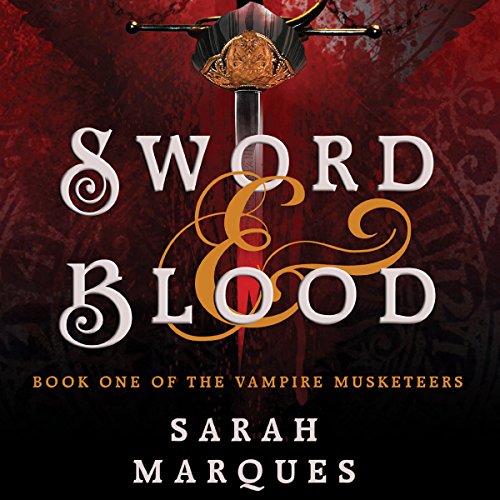 Book One of the Vampire Musketeers
By: Sarah Marques
Narrated by: Graham Vick
Length: 10 hrs and 2 mins
Categories: Sci-Fi & Fantasy, Paranormal Fantasy
2 out of 5 stars 2.0 (1 rating)

In a world where vampires have taken every humble chapel, defiled every grand cathedral, subdued most nations, and treated every human as cattle, Dumas’ hero musketeers rise to a greater challenge than they ever met in their original adventures. Under the name of Athos, Raphael, Count de La Fere, has spent a decade fighting vampires in the king’s musketeers. He never expected to see his wife again - he’d discovered Charlotte was a vampiric servant, hanged, and left her for dead 10 years before - yet it is she who turns Athos into a vampire. Or does she? Despite the craving for blood and overwhelming sexual hunger, Athos walks the fine line between the worlds, remaining human enough to fight vampires. Only his commitment and loyalty to his friends - fellow musketeers Porthos and Aramis - and a young Gascon named D’Artagnan, allows him to keep his soul through an adventure that tests the heights of his heroism and the depth of his darkest desires.

Definitely An Interesting Book To Listen To

I got this book because it sounded interesting and the plot even moreso. The actual story did not disappoint. It was pretty good and tied in a lot of elements from The Three Musketeers. And I love Aramis and Constance' relationship in the books since they're both of different faiths. And I liked the audio for the most part. The voices for the main four were perfect. There was just enough change to their voices that made Athos, Porthos, Aramis, and D'Artagnan distinguishable and fit with their personalities. Everyone else though...I honestly was confused why everyone else in the book apart from the Musketeers had French accents. It was distracting at times and didn't really fit especially if the main four had normal American accents.

The ending seemed a little repetitive because I swear I heard "Musketeers, to me! Of the king!" at least 20 times within the last three chapters. But other than that I enjoyed it. I'm very unhappy though that I can't seem to find actual copies of the sequel(s) though because they've been discontinued.