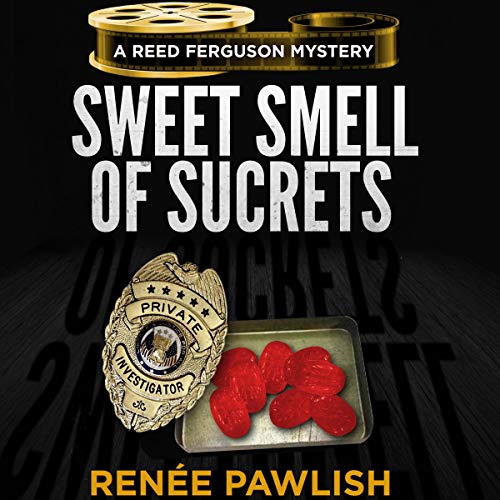 Amazon number one best-selling author - over one million books in circulation. From the author of This Doesn't Happen in the Movies, a readers' favorite finalist in mystery, join Reed Ferguson on another harrowing crime caper!

In a nightmarish turn of events, Reed finds himself the prime suspect in the murder of Denver private investigator Noel Farrell. Wrongly accused but unable to provide a convincing alibi, Reed has to work overtime to clear his own name. As Reed untangles a complex trail of clues, he learns that Farrell had discovered something much more disturbing than the usual, run-of-the-mill PI case and had attempted to contact Reed for help. Unfortunately, whoever murdered Farrell wants Reed dead, too. But can Reed find the killers before they get to him?

Filled with the usual dose of film noir and humor, the eighth book in this acclaimed mystery series brings back all of Reed’s cohorts, including girlfriend Willie, Cal, and the Goofball Brothers.

Praise for Sweet Smell of Sucrets:

"I loved the rest of the series and this one is no different."

"Great mystery. Never know who's going to be guilty."

"I love this series. I haven't miss any of the books and just ordered books nine and ten. Very enjoyable reading!"

Praise for the acclaimed first novel in the Reed Ferguson mystery series, This Doesn't Happen in the Movies:

"This is one witty, hilarious private detective story that will keep the reader glued to the pages until the very end." - Readers' Favorite

What listeners say about Sweet Smell of Sucrets

Enjoyed the narrator pace was good. Story not too demanding with identifiable characters, glad I bought it.

Do all detectives get left out in the cold?

When another privatre eye contacts Reed Ferguson and says he wants to talk, Ferguson is surprised - he doesn't know the man. But Noel Farrell doesn't show for their meet and very soon Ferguson is accused of a murder he didn't commit and forced, with a little help from his friends, to prove his innocence. But it was never going to be easy. There's a whole group of people determined not to be found out, and the intrepid detective doesn't even know what the murder victim had wanted to tell him.

This series of books by Renee Pawlish has long attracted this reader by the superb titles, all based on Hollywood noir. Ferguson is a lover and collector of memorabilia of the genre and frequent references are made to books and films as well as the actors and heroes of this period, like Humphrey Bogart and Lauren Bacall. Despite having several of the books in my to read library, however, that is where they have stayed. Until, that is, I saw that this story was not just in audio but also read by the excellent Johnny Peppers. His warm voice, nicely paced and perfect for Ferguson, really helps carry the story to it's dramatic ending.

Sweet Smell of Sucrets is fast actions and simply written with the trademark staccato sentences, and attention is also paid to the characterisation of the main protagonists. Although the story itself is certainly lacking in credibility, it is still a good yarn, true to it noir roots and easy on the ears, thanks to the narration. It is fast, sometimes funny and overall, to be recommended.

Playing dumb of what happened wasn’t working either. Now they say I am a suspect in a murder. How to prove someone beat me up, poured drink down me, and my car went in the ditch. Having gotten a call from another PI with a plea to help him on a case. Reed middle name seems to be trouble, and this one was a big one. Detective Spillman wants answer, and only getting bits of it from him. Another good plot, as you try to figure out the tangled mess he has gotten into. Given audio for my voluntary review and my honest opinion