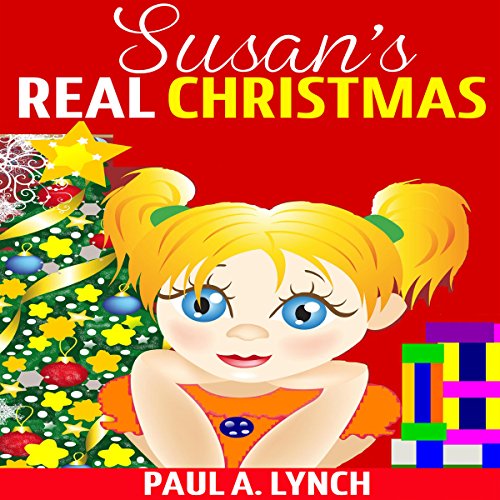 By: Paul A. Lynch
Narrated by: Adrienne M Roberson
Try for £0.00

Susan's Real Christmas by Paul A. Lynch tells the story of Susan, a 12-year-old girl who is an only child. Susan is quite selfish, but it's not entirely her fault because her parents are the same too. She is very excited about each Christmas because her parents give her the best toys and clothes because they are rich. One evening around the dinner table, Susan's father asks her if she would give her friends some of her toys for Christmas, but she insists that her friends have enough for themselves. Her dad doesn't say anything, but her mother then insists that Susan eats her vegetables. But the girl is disobedient, so her dad tells her to eat it, or she will get one toy for Christmas, and her friends will get the rest. Susan, hearing this, decides to eat her vegetables, brush her teeth, and go to sleep. However, five minutes after falling asleep, she discovers a man appearing before her in white clothes and an illuminating light. The man identifies himself as the angel of the Lord, Gabriel, who always brings good news. Gabriel then tells Susan that his mission is to bring her back in time to show her the real meaning of Christmas. In the end, Susan discovers the true meaning of Christmas, and she spreads the good news to her parents.

loved it. suitable for children and the entire family. it sends a true Christmas message

Great story by the author

Narration was great. Easy to understand. The narrative was great! See for yourself what I

I'm 12 years old and enjoyed listening to it. It has lots of facts and tells them in a fun way! :)