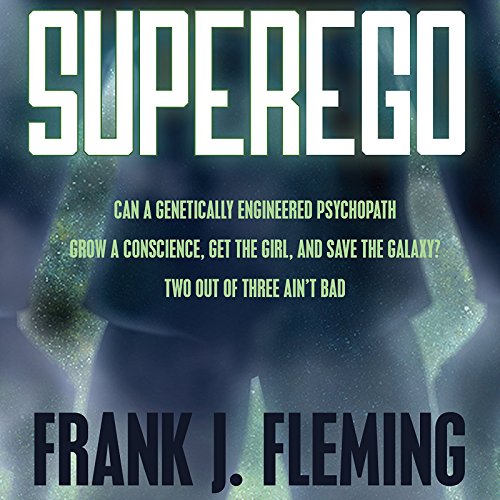 Can a genetically engineered psychopath grow a conscience, get the girl, and save the galaxy? Two out of three ain't bad.

Rico has a problem. The experimental program that gave him the high intelligence and lightning reflexes he needs as a hit man for a galactic crime syndicate left him incapable of internalizing moral imperatives the rest of us take for granted. It takes real effort for him to pass as a normal human being and he avoids it whenever he can. But he has a job he loves, a fast ship, and plenty of cash. So life is good.

When Rico takes an assignment on a planet where a major political conference seeks to bring more order to the galaxy, he accidentally thwarts a terrorist attack and has to pose as a visiting cop from a faraway world. To complicate matters, he partners with a local female cop and soon realizes he has fallen in love. That shouldn't happen! But not everything is as it seems, and as the story speeds along from one unexpected plot twist to another, Rico discovers the secret of his own identity and faces a terrible choice.

Will Rico live to become fully human? Or will he die just as he grasps what has been missing from his life?

What listeners say about SuperEgo

This was a fun and thoughtful book that is well presented. The protagonist's quest to understand his own humanity resonated deeply with me and made for a compelling character. It reminded me a little of Dexter from the television show. There is enough levity in the story to make it one of the funnier sci-fi books I have read in a while, without being overdone. The supporting characters were well conceived and added to the quality of the work. This a book that is worth your time.

Pleasing surprise I don't like sociopath books but this is hilarious and a wildly fun and at times wicked but always entertaining roller coaster ride. I had listened to too many Sci fi books that were either boorishly slow or too generic and lacking in originality. This book was not either of those and if you want funny and creative Sci fi this is truly a masterpiece

Fast paced, and hard to put down: --to the the extent I (kind of like the protaganist) found myself calculating as to how much I could impose on others (e.g. my family and employer) to keep listening. A cleverly structured plot, wildly sarcastic and wry, but subtly wise; --and intended to leave you thinking. Don't want to spoil it by telling too much, but after buying this because it looked kind of interesting as a $3.95 deal of the day (Thanks Audible!), I was thrilled at finding an out-of-the-blue best-listen that was so fresh, and enjoyable. Well worth a credit, or the member price!

I absolutly love the main character in this book.
Narrator is a perfect fit also.. MORE......(please)

Satirist Frank J Fleming has written a really funny novel, his first foray into the medium. The result is not just good,; it is great. The novel is about Rico a man who flies about the populated planets of the galaxy as a killer for hire. Rico does not relate well to other humans; well, actually he does not have empathy for anyone but himself and lower forms of life.

SuperEgo is really a new genre of fiction. Let's call it "satirical psychopathic science fiction". The book starts a little slowly, but after an hour it is almost impossible to put it down. Mostly the book is laugh-out-loud funny.

The narrator, the voice of Rico, is ideal.

Best book I have read this year

Would you consider the audio edition of SuperEgo to be better than the print version?

Audio is always better than print version, but the reader is especially good and well suited.

What other book might you compare SuperEgo to and why?

This book has some Simon Green elements that I really like, except it also has humor. The humor is especially good because it is so unexpected.

I liked the ending.

This book made me want to drive to work in traffic.

I will auto buy any book by this author, and I fully recommend it.

This book was fun to listen to. The main character Rico was funny cool and very likable the story was engaging and exciting. The narrator did a great job with each character. Good action and even a little bit romantic overall this was a great book. I really hope there is a sequel. I highly recommend this book you won't be disappointed

This is one of those book that is good and keeps you listening but when taken by itself is only so so. What it does do is leave you anticipating where the author will take the next book. So many possibilities in the world that emerges from the end of this book....hopefully the author is up for the challenge.

Another multiple listen for me. Rico is my second favorite assassin, right up there with Victor. J.

Loved it and can't wait till the next installment. Main character is believable and the story is wide open to universal possibilities.