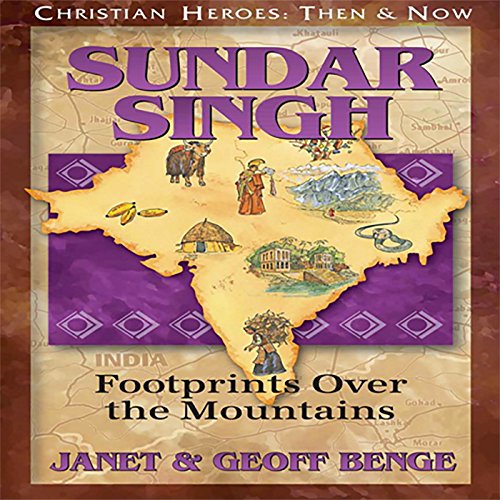 Sundar Singh: Footprints over the Mountains

By: Janet Benge,Geoff Benge
Narrated by: Tim Gregory
Try for £0.00

As Sundar preached the gospel to the crowd, the monastery guard marched forward and arrested him. Sundar was dragged to the edge of town and hurled to the bottom of an abandoned well. The air was putrid. Desperation and loneliness soon washed over him. Left to die, Sundar leaned against the side of the well and began to pray. Searching since boyhood for the way to God, Sundar Singh found truth in Jesus Christ.

At 16, the former Sikh became a Christian sadhu, or holy man, and at great risk devoted his life to Christ. With bare feet and few possessions, Sundar crossed the precarious Himalayas between India and Tibet many times, sharing the gospel with Hindus, Buddhists, Sikhs - even thieves. As he traveled, Sundar constantly read the Bible, prayed, and meditated, confident that God was always with him, even in the face of death. Preaching in Asia and Europe and as far away as America, this Indian saint impacted thousands with his quiet yet bold words and actions. (1889-1929)

What listeners say about Sundar Singh: Footprints over the Mountains

Wow this is a stand out story!

What an incredible man what an incredible story of faith. Truly inspiring!! My son and I were captivated from the start. Sundar Singh's story will stay with you for a long time after. I learnt many lessons from him and his absolute dedication and humility.
Brilliant story, a true hero of faith.

This life of the christian sadhu will challenge your christian life. we all have to live for our Lord Jesus Christ and not for ourselves

Draws you in and hard to stop listening!

Draws you in and hooks you. Well written story. Very challenging and encouraging. Buy it!

We praise the Lord for such a godly man. it was an inspiring and challenging story. Thank you for recording this book so that others can enjoy his testimony.

A beautiful account of a humble man who loved Jesus with everything he was and who loved to share Jesus’ love with the lost.

This is one of the most inspirational & inspiring stories I have ever heard!! Highly recommend this title!

What an awesome testimony of what God can do to those who seek Him with will their hearts! It's like reading the Acts of the Apostles!

one of my all time favorite, very inspirational! I hope to share this book with many people.

One of the very best books I have ever read. We have to thank God for this man.

Truly a man of God!

I TRULY LOVE THIS STORY, IT'S TRULY INSPIRATIONAL AND MOTOVATIONAL! I LOVE THE WAY HE TRULY GAVE HIM SELF TO THE LORD JESUSCHRIST ENTIRELY, WITHOUT ANY COMPLAINTS OR WHINING. HIS FAITH NEVER WAIVERED AND HE ALWAYS KEPT AN INTIMATE RELATIONSHIP WITH THE LORD JESUSCHRIST. HE NEVER PERMITTED PRIDE TO ENTER HIS HEART. HE HAD A HEART OF GOLD. HE WAS AN APOSTLE PAUL IN HIS TIME. A TRUE ROLE MODEL.

An amazing testimony of coming to Christ!

This is the amazing story of how Jesus Christ transformed a teenager of the Sikh religion, who was about to commit suicide, into a follower and apostle of the Lord Jesus Christ as a witness in India, Tibet, and around the world!!