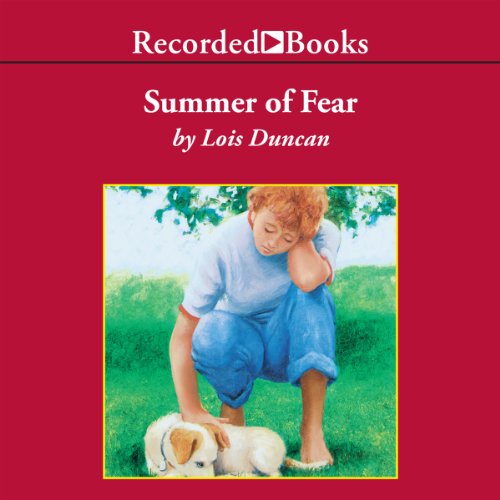 By: Lois Duncan
Narrated by: Ruth Ann Phimister
Try for £0.00

For 15-year-old Rachel Bryant, summer vacation promises to be fun. Her 17-year-old cousin Julia will be coming to Albuquerque, New Mexico to live with the Bryants, following her parents’ deaths. With two brothers, Rachel is looking forward to finally having a sister. From the moment Julia arrives, everyone is enchanted with the orphaned teenager. But Rachel finds her strangely disturbing. Soon an evil poison seems to seep into every corner of her life. Can she discover what Julia is trying to do before it’s too late?

Best-selling, award-winning author Lois Duncan has won high acclaim for her fast-moving thrillers for young adults - and Summer of Fear is one of her most popular novels. With her dramatic pacing, Ruth Ann Phimister’s skillful narration heightens each chilling moment of suspense. Don’t miss Lois Duncan’s other exciting title, Killing Mr. Griffin.

What listeners say about Summer of Fear

As a young teen, I was a huge fan of Lois Duncan’s writing, and as my daughter approaches the appropriate age, I ordered paper copies of my old favourites for her. In a nostalgic moment, I thought I’d download this audio copy as a treat for myself.
Without giving the story away, I’ll tell you it’s every bit as good as I remember! The main themes are absolutely the stuff of teenaged angst: identity; loss; alienation; insecurity; jealousy; love and friendship etc etc and Duncan describes the tumult perfectly, wrapped in just enough horror and thrill to make Summer of Fear a really gripping story for its target audience.
What got in the way, for me at least, is the narrator, whose voice (though lovely), is just too old for the characters. There’s something jarring about a middle aged actor putting on a squeaky voice to narrate in the first person. It’s a mismatch.

A great intro to mystery.

I read this story as a child and loved it. However, the performance is a little disappointing.

Shorter, not as polished, but still compelling LD

What made the experience of listening to Summer of Fear the most enjoyable?

Knowing that it was a Lois Duncan novel so that even though the first 1/3 or half of the book is not as tension-filled as her books usually are, at some point things were going to get cray-zeeeee! (And they do).

What other book might you compare Summer of Fear to and why?

I think comparing it would give away too much of the plot/twists. I'll just say that it has an important and common feature of young girls' fiction: the rival female who threatens to usurp the protagonist's standing and relationships, pulling the wool over everyone's eyes except our heroine's.

Have you listened to any of Ruth Ann Phimister’s other performances before? How does this one compare?

No, I haven't. But I'll say that I disagree with those who say she sounds too old to play the teenage narrator. Would you want an actual teen voice actor? I'd argue, no, you sure wouldn't. (For an example, why not listen to Audible's own samples of the re-issued versions of some of Duncan's novels? Not only is the material in the book adulterated--sorry, "edited"--- for a post-2010 readership, but the narrators they chose are distractingly immature-sounding, with Valley Girl-esque diction and intonation. No, thanks! I'll take a middle aged or senior citizen narrator over that.)

Besides, I've never thought that the "voice" (POV, writing narrative style) of Duncan's teen girl protagonists was meant to be literally that of a young girl. If you re-read the ones with first person POV, you might see that there's always a bit of intellectual and emotional distance between the character and others in her peer group, and possibly even between the character's increasingly wise internal monologues and her gullible actions at the beginning of the book. I think an older narrator is a good choice to represent that distance in a metaphorical way.

Last point--this book was published in the mid-1970s. Listen to the female actors in movies and radio then; they spoke with more poise and clarity than the young girls of today. Nowadays a more slang-y way of speaking with a more casual haphazardness is just more socially acceptable. It's authentic to the book's time frame to have a teen protagonist voiced by someone old enough to remember the 70s and the way young women were influenced to speak then. Just my opinion/preference.

All that said though...Phimister's rendering of the hillbilly character Julia is just painful to listen to! Sounds like the croakings of a frog.

Yes, one of the last scenes in the book, showcasing the vindicating power of the love between parent and child. I might have felt a few tears well up.

Hooray, this book is the original one, not the reissued and altered version from the 2000s!

I fear the narrator is an odd choice

What made the experience of listening to Summer of Fear the most enjoyable?

I read this book in the late 70s. I really enjoyed the story then and wanted to re-read the book. I just bought the Audible version. I started listening and was immediately turned off the voice, this was just too old to be 15 year old Rachel.

The story was something I remembered, but not the whole story. The facts that I remembered were in the first chapter. I kept listening to the story and I enjoyed everything, even to the very end.

What aspect of Ruth Ann Phimister’s performance would you have changed?

Her voice sounds old and not young. I think this is a very odd choice for this story.

Brings Memories Back from High School

Would you listen to Summer of Fear again? Why?

Yes. I remember reading it as a young girl and after all these years, it has stuck with me, so I would definitely listen to it again. The story is simple but captivating. The narrator does an excellent job with the book.

Which character – as performed by Ruth Ann Phimister – was your favorite?

Julia-- she had the Ozark, backwoods, southern-drawl down for the character.

Yes. I do a lot of driving for work and would hope to get an extra 30 minutes between visits with my patients to listen to a little more.

I would love to see (if I haven't already??) the Wes Craven adaptation for TV this book was made into.