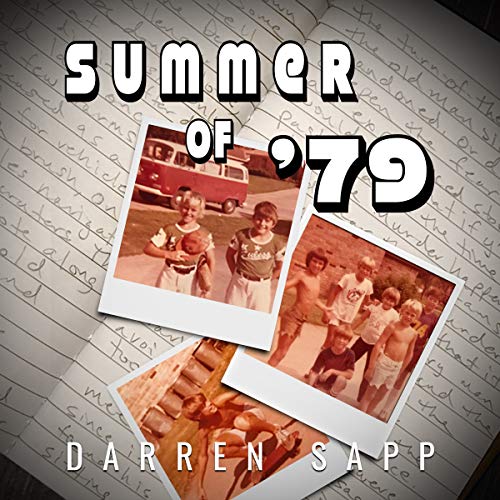 By: Darren Sapp
Narrated by: Eddie Frierson
Try for £0.00

For fans of Stand by Me and Stranger Things.

Devil’s Backbone dirt road weaves through tall East Texas trees. The eerie Claymore mansion sits silently along the path. Thirteen-year-old Kevin Bishop and friends plan to spend their summer swimming, playing baseball, and erecting a massive fort in the nearby woods. Their daily journey requires a bike ride down that road and by that mansion - the site of a gruesome unsolved murder near the turn-of-the-century. They stumble upon evidence to solve the mystery as unforeseen adversaries make this a summer they’ll ever forget.

This coming-of-age tale will take listeners down memory lane with plenty of suspense. This was the time when kids drank from hoses, arena rock ruled, and cutoff jeans were normal attire. The sleepy little town of Mead Creek never expected a summer like the one of 1979.

What listeners say about Summer of '79

For Dickie and his family.

The small town of Mead Creek was notable for only two things: a skirmish during the Civil War and the unsolved triple murder of a family. After the school term finishes, and in the heat of the Texas summer, three young teenage friends, Larry, Kevin and Slads, and brother and sister, Butt and Wendy, set off on their bicycles along the Devil's Backbone track, past the creepy old derelict mansion some kids said was haunted, and into the forest to build a secret fort, or clubhouse, where they could have out without any adults to bother them. Where they could have adventures, swim, fish and have fun.

This delightful thriller mystery is not fast paced, no big shoot outs, no fast car chases. It moves at a slower speed, like the time: this is 1979, with T.V. but no computers, only very basic electronic arcade games like Space Invaders, no mobile phones to keep in touch and only maps to find directions. Need to find something out? Go to the library. And for the five young people, the days were long and languid, supervision minimal. There are numerous cultural iconic mentions of the time in the story, but it is the conjuring up of the exuberance and curiosity of youth which really suffused the book. The story's mystery might be somewhat predictable to the reader, but that doesn't matter: it is the youngsters following of the trail itself which is thrilling, an innocence and a capacity to move forward. Although not individually fully formed three dimensional characters, the group works well as a whole, dialogue between them, with small insults and interuptions, felt genuine, real.

Like the storyline, the narration by Eddie Frierson is slow and languid, with clear definition, good intonation and each character is separately and appropriately voiced. It all adds to enhance the leisurely atmosphere of the time. Only forty years ago but so much has changed. And an occasional burst of background sound track is added to give greater depth. One complaint, however: the silent gaps between chapters was often overlong, giving rise to a slight anxiety that something had gone wrong with the playback.

My thanks to the rights holder of Summer of '79, who, at my request, freely gifted me a complimentary copy, via Audiobook Boom. It was a pleasure to hear, to mentally step back into more gently moving times and relax into the magical age between childhood and adu!t - without having to personally suffer the angst which goes with it. Recommended for all ages and as a family read-together.

This coming of age, murder mystery took me back in time. I was a decade older than the kids in this book, but I found them realistic. I appreciated the clean language and great story line.

The narration was well done. The characters were well portrayed. Eddie Frierson brought each character to life.

I was given this free review copy audiobook from the author, at my request and have voluntarily left this review.

I very much enjoyed this summer yarn about kids enjoying the last of their childhood while a southern town huffs and puffs away on its own.

When our young band is slowly drawn into an old murder mystery, it gradually becomes apparent where, in a place of complicated and intricate connections, lie both danger and help.

I mostly enjoyed the message of how life goes on, how both old and young cope, and keep it moving, and how any ordinary life is also touched with greatness.

Because Mr. Frierson speaks with perfect diction and expression, I started to grumble in the beginning about how it seemed like some fine fellow was just "reading me a book". Then, like all wonderful narrators, he disappeared, and there were just the characters and the story.

With this story you aren't going to be scared, nor will you find new and unusual ways for people to be evil, and tbere are a few revelations, but they aren't the point. Come to this for a quiet, overall message of the good, and you won't be disappointed.

Nostalgic Adventures Of Kids On Bikes

“Summer of ‘79” is a charming look back at an era of small town kids on bikes, having adventures that adults in authority positions (in the days before helicopter parenting) are entirely oblivious to.
I hasten to make comparisons, because I don’t want to build a false expectation, but there are a handful of 1980’s movies that come to mind. I think this book achieves exactly what it set out to do - tell an adventurous tale of a bygone era, in a somewhat relaxed style and pace that accurately reflects the era. The world moved slower in 1979. Kids had a lot more free time, and plenty of energy to build forts and go on adventures.
I myself was 8 in 1979, and lived in a small town. So it was easy for me to settle into the setting of this book. And while the story is a mystery, I would say that the kids’ investigation of the mystery is much more important than the actual solution.
I was provided with a free review copy of the audiobook from the author, and am glad I did. It was such an enjoyable, nostalgic listen. The narrator did a good job of bringing the various characters to life, pulling the listener into the story. I can easily see myself giving it a second go around, in the near future.

I laughed out loud!!!

Great story!!! Brought up memories from my youth. The DQ men are hilarious!! These men can still be found at Jack’s eating breakfast every morning!!

Darren Sapp did it again a excellent story. Also read Fire on the flight deck

Coursity and young kids. Riding their bikes everyday they see this mansion. It draws them to solve a cold case. Good nostalgia with a good plot. The narrator added by Frierson was good, a good clear voice. Given audio for my voluntary review and my honest opinion

I totally enjoyed this trip to the past.I was the same age as these kids doing similar things in 1979,so it was very relatable. Town kids find something buried in the woods when they dig to build a fort.They start looking into it and a haunted house and things get mighty sticky! Eddie Frierson was a fine narrator for this book.
I was given this book by the narrator,author or publisher free for an honest review.

I actually liked this book more then I thought I would. The author I thought wrote this book really well. The characters acted their age and when the narrator was reading I felt it. Some authors I find don't always do this really well.
It does start of slow but it builds up.
I would highly recommend this book. If you liked stand by me then you'll love this one.

My first read from author Darren Sapp. The narrator did a fine job and the accompanying sound effects added to the book's enjoyment. I was provided this free review copy audiobook by the author & am voluntarily reviewing it. An enjoyable, nostalgic read/listen I enjoyed the mystery & will definitely read more by him. (RIP Marley January 20, 2014 - July 24, 2018).