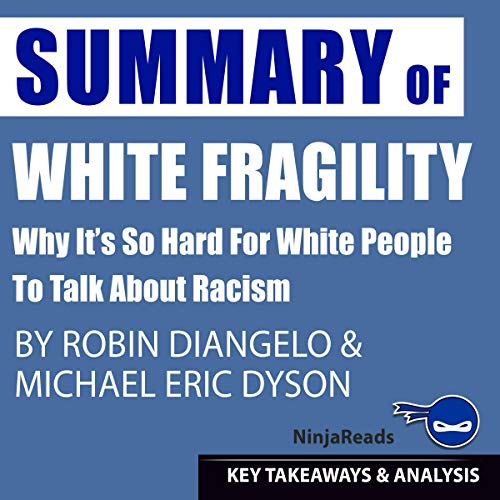 Please note: This concise summary is unofficial and is not authorized, approved, licensed, or endorsed by the original book's publisher or author.

Short on time? Or maybe you’ve already read the book, but need a refresh on the most important takeaways. In a quick, easy listen, you can take the main principles from White Fragility: Why It’s So Hard for White People to Talk About Racism!

The phrase “white fragility” has grown into a term that many people have accepted and referenced when talking about the defensiveness and discomfort a white person feels when talking about race. The term, originally coined in a 2011 article by Robin DiAngelo, is now used in various articles, books, TV shows, and more. Although it’s commonly heard, not many people truly understand what it means.

That’s why Robin DiAngelo wrote the book entitled White Fragility: Why it’s So Hard for White People to Talk About Racism. DiAngelo is an author, former professor, and lecturer with a PhD in Multicultural Education from the University of Washington in Seattle. For more than 20 years, she’s focused on racial justice and whiteness studies. Her book on white fragility is a culmination of everything she’s learned from her personal experiences, her studies, and her interactions with white people and people of color.

Her book aims to create a dialogue about race despite the white fragility that Americans feel when confronted with that topic. The book, published in 2018, has gained strong reviews because it explores race in-depth and attempts to break down those walls that white people have built in order to protect themselves from acknowledging their race and the benefits it gives them in life. The book debuted on the New York Times best-seller list.

DiAngelo is the two-time winner of the Student’s Choice Award for Educator of the Year at the University of Washington’s School of Social Work. Aside from her White Fragility book, DiAngelo has numerous other publications and books under her belt.

White Fragility: Why It's So Hard for White People to Talk About Racism is the number one best seller in the discrimination and racism category on Amazon. That’s because it’s a useful tool that can be used in classrooms, discussions, lectures, and more. For those not in an academic setting, it’s also simply just a book that people from all different cultures can learn from, as it aims to teach us all how we got to this point in society, why we have the racial biases we do, and how we can overcome white fragility in order to have meaningful relationships with people of color.

What listeners say about Summary of White Fragility

This is a pithy summary of the book.

This is a pithy summary of the book. Thanks for organizing. Important read. I appreciate.

I found myself disagreeing with some of the points because I think I needed more depth of understanding. I will listen to the full book, which to be fair is recommended.

NinjaReads delivers a clear and concise analysis of White Fragility for those who either wish to cement the points after reading the book, or who want an overview that will give them the key message without the runtime. I have never opted for abridged before, but wanted the info quickly amongst several things I'm reading on the subject. Ninja Reads did not disappoint, it feels like I read a whole book this morning!

I know you are, but What am I?

The reviewers were neutral they just stated the info of the chapter and this what the author wanted you to get from it. Quick and to the point