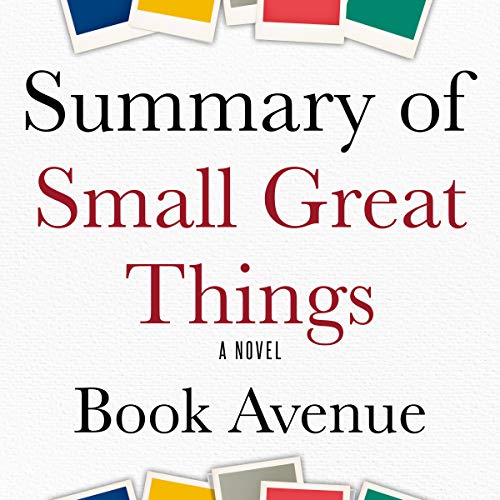 By: Book Avenue
Narrated by: Leanne Thompson
Try for £0.00

This is a summary for Small Great Things, by Jodi Picoult. In this book, we meet Ruth Jackson, who grew up in a poor part of the city. Her mom was a maid for a wealthy white family. As a child, Ruth was highly intelligent and attended an elite school. She spent most of her life trying to fit into a world and profession dominated by whites.

When Turk and Brittany Bauer give birth to a son named Davis, Ruth is the only black nurse in the department. The Bauers are skinheads and don’t try to hide their prejudice.

Turk objects to her care and Ruth is removed from the case and told not to touch Davis again. Later, Davis stops breathing and Ruth goes against the orders and tries to resuscitate him. The medical team deos everything they can, but Davis doesn’t make it.

In this guide, you’ll find:

There are so many things you’ll learn in this summary - most of all how prejudice comes in a variety of forms. It’s not just about hate. This is a heartfelt story that opens up the idea of prejudice in a way that everyone can better understand it - and therefore learn how to combat it.

What listeners say about Summary of Small Great Things: A Novel

Truly loved this book .... though I had to put it down several times because it brought about such raw emotion. The race topic is so difficult yet so important to discuss.

One of her best books to date. This writer's ability to get into your head and make you think, question and challenge your beliefs is nothing short of miraculous. A must listen for the times of today.

I really liked this book. It made me look inward and examine my own prejudices. Parts of the book were a little rough to listen, but I'm glad I didn't let the violent scenes make me stop listening.

I loved this book! One of her best! It made me look inside myself with its ideas of racism from all different angles! I found myself asking people if they listen the book so I could see what they thought. It was so timely, too!

I love this book for what it taught me about myself and others. It has caused me to regularly examine my thoughts and actions in order to do better.

A truly well developed evolution of self. This story allows time to acknowledge the characteristics of each of the key players & then reflect each of these back to myself, my experiences, my realities.

This book was a fascinating, eye opening journey.

This book was a fascinating, eye opening journey. I could hardly put it down it was that good. Thought provoking as well as being a fabulous, exciting story. I highly recommend it to readers of all ages. You won’t be able to walk away from it without a new perspective on racism, prejudice and the world we live in.

Every person defines racism based on their own life experiences . No one wants to think that they are racist. This book is a mirror of our society that makes each reader rethink everything they know and believe about themselves and race.

Well written with good flow, this literally was a book I could not put down. It makes you think and question your own beliefs and thoughts on racism and prejudice in today’s society.

This book was completely absorbing.

This book was completely absorbing. It was a gripping read and a difficult one. The author addressed a very difficult issue of racism. I learned so much from this book. It left me emotionally drained. In the end it was very satisfying. I am going to recommend this one to my book club and others.

This book will change your outlook on race and discrimination. The characters are so real and the story is so wonderfully presented. I do and will recommend this to all my family.

Although it is disturbing to listen about racial discrimination and white supremacists, the book is well-written and sheds some light on a very current problem in our society. Characters are well-developed and it is an engaging story.

Small Great Things is an incredible novel. It revealed activities I never knew existed by white people and the price black folks and others with different life styles paid and suffered, Ruth was able to show us what we don't get and hopefully her sentiments will help us lead better lives with honest and openness.

This book leads the listener out of their comfort zone & into the wrath &revenge-seeking of white supremacy. Mindless violence difficult to listen through but ending resolves issues well. A few technical problems with medical & legal actions but well layered & worth buying. Highly recommend.