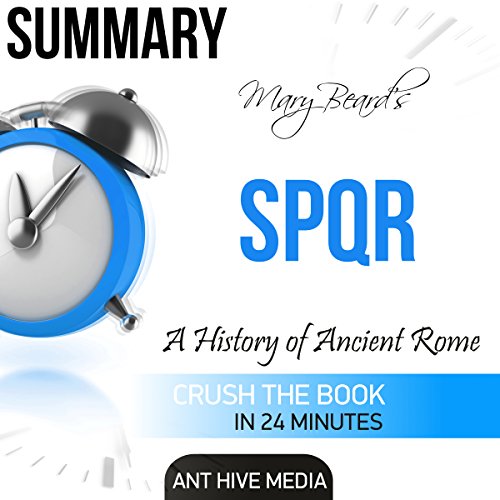 Summary of Mary Beard's SPQR: A History of Ancient Rome

This is Roman history roughly from its mythological dawning at about 753 BC to the time when free adult males within the Roman Empire were declared citizens of Rome by Emperor Caracalla in 212 CE.

Beard starts the history of ancient Rome with an account of how Lucius Sergius Catalina (Cataline) conspired against Rome and how he was foiled by the Senate. The book uses the conspiracy as a springboard to discuss various aspects of Roman civilization, including citizenship and its military as well as Rome's perceptions of social structures such as slavery, religion, and the position of women in society. Historical figures that greatly influenced the development of the empire are also discussed.

The book proposes that the rise of the Roman Empire from a small settlement near the Tiber to the most powerful empire in ancient history was due to Rome's receptiveness to trying new ideas. Likewise, Beard believes that Roman civilization is still very relevant to our modern times, particularly to current-day discourses on freedom and protection of the state.

SPQR is the abbreviated form of Senatus Populusque Romanos, meaning "the Senate and the People of Rome", which is ubiquitously etched in most Roman manuscripts, objects, and structures.

This summary of Mary Beard's SPQR: A History of Ancient Rome is aimed at those who want to capture the gist of the book. You get the main summary along with all of the benefits and lessons the actual book has to offer. Ant Hive Media reads every chapter, extracts the understanding, and leaves you with a new perspective and time to spare. We do the work so you can understand the book in minutes, not hours.

What listeners say about Summary of Mary Beard's SPQR: A History of Ancient Rome