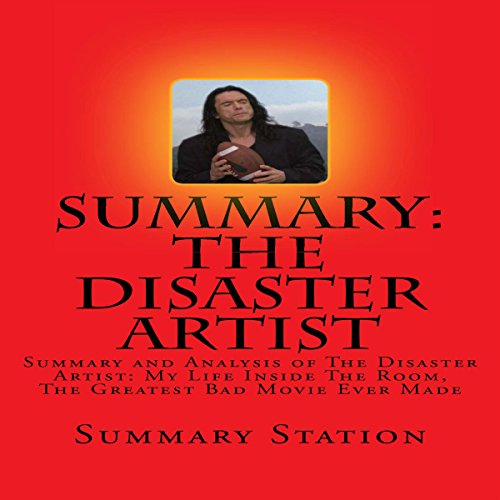 Summary and Analysis of The Disaster Artist: My Life Inside The Room, The Greatest Bad Movie Ever Made

By: Summary Station
Narrated by: Brian Ackley
Try for £0.00

Learn about Tommy Wiseau and the best bad movie ever made in a fraction of the time it takes to read the actual book!

The opening chapter of Sestero's book introduces us to Tommy Wiseau, the eccentric filmmaker himself, as he treats his friend, Greg Sestero, to a celebratory dinner at Hollywood's Palm Restaurant. Filming of Wiseau's film, The Room, starts the following day. Sestero explains that Wiseau wrote, directed, produced, cast, and starred in the film - a true passion project. Sestero spends the majority of this chapter detailing Wiseau's all-around strangeness. For example, Tommy's hair is long and unkempt, he wears outdated clothes with two (yes, two) belts on his pants, and he drinks glasses of hot water with every meal. Two girls come over to the table, introducing themselves and flirting accordingly, and Wiseau - who speaks in broken English - insults them viciously and hilariously in a French(ish) accent. Wiseau then racks up a huge bill, barely tips the waiter, and storms out of the restaurant in traditional Tommy Wiseau fashion. Wiseau then drives himself and Sestero from the restaurant at a mere 20 miles per hour in his Mercedes. In the car, Tommy makes Greg an interesting offer the day before his film's production: Tommy wants Greg to star in The Room as Mark, a character who betrays Tommy's lead character, Johnny.

Here is a preview of what you'll learn when you download your copy today:

What listeners say about Summary and Analysis of The Disaster Artist: My Life Inside The Room, The Greatest Bad Movie Ever Made

not the book you're looking for

its a summary of the book disaster artist, a cheap cash grab that I unfortunatly fell for

I downloaded this because I thought it was the real thing

Would you ever listen to anything by Summary Station again?

His voice is terrible

This is a pathetic cash grab.