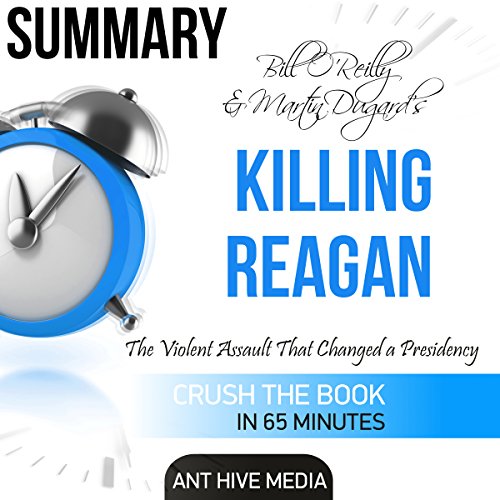 This is a summary of Bill O'Reilly and Martin Dugard's Killing Reagan: The Violent Assault That Changed a Presidency

From the best-selling team of Bill O'Reilly and Martin Dugard comes Killing Reagan, an epic account of the career of President Ronald Reagan that tells the vivid story of his rise to power - and the forces of evil that conspired to bring him down. Just two months into his presidency, Ronald Reagan lay near death after a gunman's bullet came within inches of his heart. His recovery was nothing short of remarkable - or so it seemed. But Reagan was grievously injured, forcing him to encounter a challenge that few men ever face. Could he silently overcome his traumatic experience while at the same time carrying out the duties of the most powerful man in the world?

Told in the same riveting fashion as Killing Lincoln, Killing Kennedy, Killing Jesus, and Killing Patton, Killing Reagan reaches back to the golden days of Hollywood, where Reagan found both fame and heartbreak, up through the years in the California governor's mansion, and finally to the White House, where he presided over boom years and the fall of the Iron Curtain. But it was John Hinckley Jr.'s attack on him that precipitated President Reagan's most heroic actions.

In Killing Reagan, O'Reilly and Dugard take listeners behind the scenes, creating an unforgettable portrait of a great man operating in violent times.

Available in a variety of formats, this summary is aimed for those who want to capture the gist of the book but don't have the current time to devour the whole book. You get the main summary along with all of the benefits and lessons the actual book has to offer. This is a summary that is not intended to be used without reference to the original book.