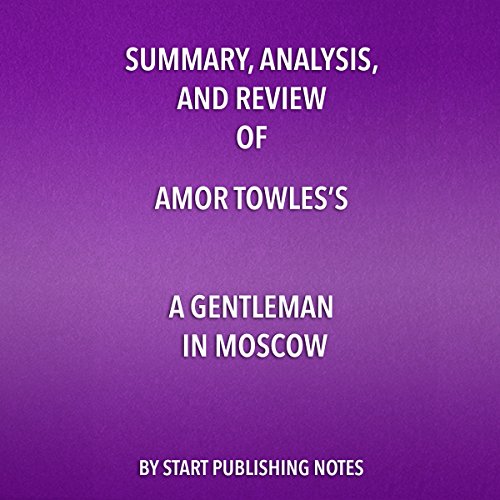 Summary, Analysis, and Review of Amor Towles' A Gentleman in Moscow

Please note: This is a key takeaways and analysis of the book and not the original book. Start Publishing Notes' Summary, Analysis, and Review of Amor Towles's A Gentleman in Moscow: A Novel, includes a summary of the book, review, analysis & key takeaways, and a detailed "About the Author" section. A Gentleman in Moscow by Amor Towles, is a novel about Count Alexander Ilyich Rostov, a Russian aristocrat who is condemned by Communists to spend the rest of his life confined in the Metropol, the capital's most glamorous hotel. The story opens on his trial in 1922, where he's shown leniency as a reward for having written a revolutionary poem that pre-dated the Russian Revolution. The only catch? If Rostov ever leaves the hotel, he will be executed. The novel unfolds over the course of the 32 years that Rostov spends under house arrest. The first thing to know about Count Rostov, is that he didn't write the poem, his best friend Mishka did. The pair conspired to publish it under Rostov's name because, at the time, Mishka - who was not an aristocrat like Rostov - would have been murdered by the czar's regime for dissonance. Rostov, in sharp contrast, was then a member of the protected class. By the time the revolution began in 1918, Rostov was living in Paris. In the face of certain danger, he returned to Russia to help his grandmother shutter her estate. When that task was complete, he took up residence in one of the Metropol's finest suites.

What listeners say about Summary, Analysis, and Review of Amor Towles' A Gentleman in Moscow