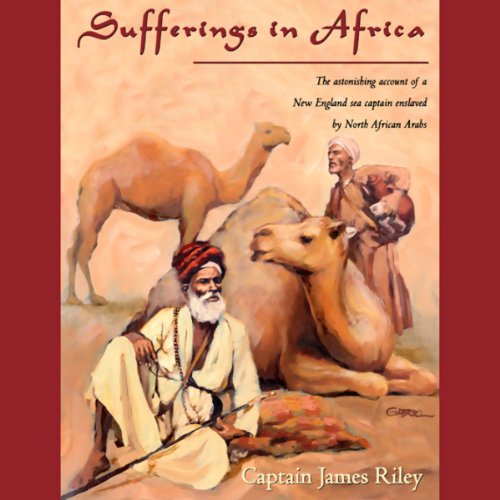 By: James Riley
Narrated by: Brian Emerson
Try for £0.00

In this classic tale of adventure, a young American sea captain named James Riley, shipwrecked off the western coast of North Africa in 1815, was captured by a band of nomadic Arabs and sold into slavery. Thus begins an epic adventure of survival and a quest for freedom that takes him across the Sahara desert.

This dramatic account of Captain Riley's trials and sufferings sold more that one million copies in his day and was even read by a young and impressionable Abraham Lincoln. The degradations of a slave existence and the courage to survive under the most harrowing conditions have rarely been recorded with such painful honesty.

Sufferings in Africa is a classic travel-adventure narrative and a fascinating testament of white Americans enslaved abroad, during a time when slavery flourished throughout the United States.

What listeners say about Sufferings in Africa

This is a harrowing and amazing account by a New England ship captain of his crew's shipwreck off northern Africa in the early 1800s. His writing is vivid and comprehensive, describing their treatment, and the lifestyle of their captors, and how his own wits and faith saved most of his crew. It is quite grueling, but worthwhile and it all ends well, thankfully. I kept wondering how many Americans had died overseas in similar circumstances, those who had not been able to talk their way to freedom? The narration is good, as well.

I tried two or three times to listen to this book, partly because I saw the story on TV and it was utterly captivating. However, the narrator has such a strange oral delivery that I found it impossible to concentrate sufficiently and get into the story. He has a nice sonorous voice, but he doesn't seem to put the proper tones and intonations at the right places in the sentence. It is hard to explain, but you might want to listen to the preview first before buying.

an absolute must listen to

This is an incredible story! The author was capable enough to be able to tell us all that happened to him in such a way that after you finish,you feel (for better or worse) that it was actually you that had the experiences. I was captivated all the way through the book.

It's an old text, but shows an intimate, and fairly balanced view of traditional nomadic Arab life on the Southern west coastal region of Morocco in the 1815s. The original author strives to represent the environment and human life as he sees and experiences it. It kind of cuts off, meanders once the Americans shipwrecked are finally 'rescued as I would like to hear about their return... but .. can't read what isn't there 🤷🏻‍♀️. If interested in antique ethnography, give this a listen.

Treasure of a story

If you could sum up Sufferings in Africa in three words, what would they be?

Great story, I couldn't believe I had never heard of this story before. Very vivid descriptions of the Arab culture as well. I recommend this book.

The book is ruined by the terrible narrator.

The story itself is good. Even I didn't finished due to the terrible narrator.

A must read for history enthusiasts

This is a interesting and factual recount of witnessed history. A book now 200 years old that gives us an account of a culture that is long past and The roots of a culture the west currently grapples with. It is a must read for anybody interested in today's east west conflicts and honest real history.