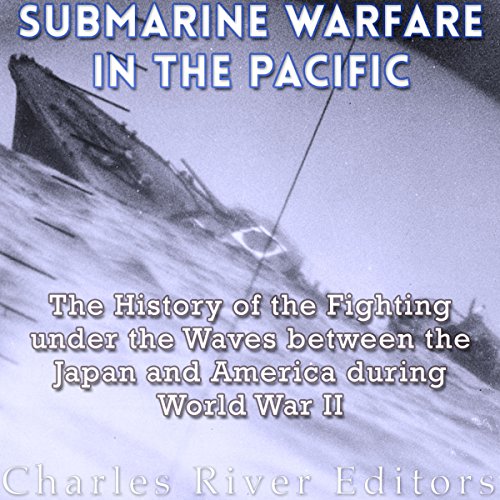 Submarine Warfare in the Pacific

The History of the Fighting Under the Waves Between Japan and America During World War II
By: Charles River Editors
Narrated by: Dan Gallagher
Length: 1 hr and 22 mins
Categories: History, 20th Century
2 out of 5 stars 2.0 (1 rating)

Submarine Warfare in the Pacific

Submarines exercised a decisive impact on the outcome of the Pacific Theater in World War II. The US submarine fleet, largely though not exclusively under the overall command of Vice Admiral Charles Lockwood, strangled the supply lines and shipping traffic of the Empire of Japan. Their commerce raiding crippled both Japan's ability to keep its frontline units supplied and to manufacture the weapons, vessels, and vehicles needed to successfully carry on the struggle. The United States and Japan both produced excellent, high-tech submarines in the context of the World War II era. Japanese I-boats showed excellent seakeeping capabilities and offered the versatility created by their large size, including the ability to serve as motherships for midget submarines or aircraft carriers for scouting aircraft or even specialized bombers. The Type 93 Long Lance and Type 95 torpedoes they carried packed enough punch to sink capital ships like battleships and carriers at ranges of several miles.

American submarines, though smaller, could dive deeply, move quickly, and provide both firepower and survivability. Though their type XIV and type XVIII torpedoes could not match the Japanese type 93, they still gave a lethal punch, particularly after improvements in late 1943. The USS Archerfish demonstrated the deadliness of American submarines to Japanese capital ships also.

The submariners of both fleets showed immense courage, daring, and skill in carrying out their duties. Both groups of men exhibited aggression, patriotism, and fighting spirit in equal measure, regardless of the different cultural lenses through which these traits manifested themselves. Both navies successfully produced professional, highly capable submarine officers.

The Japanese, however, decided to use their submarines mainly to support a grand fleet action at visual ranges, which never occurred. Instead, the submarines carried out sporadic, uncoordinated attacks and the rest of the time remained on sentry duty or found their time squandered with supply runs and undersea evacuations. The Japanese never corrected these problems - probably due to cultural factors. The rowdy, democratic Americans, suspicious of authority and used to asserting themselves, confronted their commanders boisterously when they felt something was amiss. The torpedo problem nearly caused fistfights between submarine skippers and admirals, yet in the end, the admirals examined and corrected the problem.

Though constituting only one point six percent of the total US Navy's tonnage in the Pacific, the submarine fleet inflicted massive losses on the Imperial Japanese Navy and Japan's crucial merchant marine. Submarines sank 55% of the merchant shipping lost, or approximately 1,300 vessels; overall, the Allies sank 77% of Japan's shipping.

Submarine warfare in the Pacific

I know it is a large subject, however I would call this book an introduction to the Pacific submarine campaign.