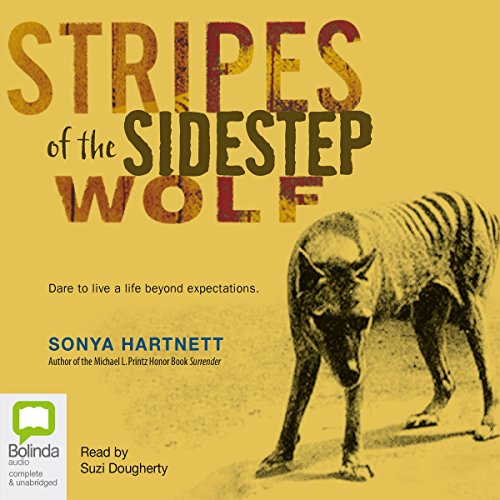 Stripes of the Sidestep Wolf

By: Sonya Hartnett
Narrated by: Suzi Dougherty
Try for £0.00

From one of the most talented and versatile voices in contemporary Australian literature comes this somber, introspective dirge, centered around the discovery of a mysterious, unidentifiable beast. Sonya Hartnett’s Stripes of the Sidestep Wolf follows high school dropout Satchel O’Rye, drifting between jobs as he tries to support his family in the absence of his deadbeat dad. Satchel’s situation begins to change when he discovers an unusual, seemingly canine animal. He develops a friendship with social misfit Chelsea Piper, as the two spend time together pondering the nature of this strange beast. Actress Suzi Dougherty (The Loved Ones, Home and Away ) lends fluid eloquence to this heartrending work of fantastic realism, while nevertheless striking a reflective tone, betraying understated sympathy for the hapless Satchel.

An original and gifted novel from the internationally acclaimed author of Surrender, Of A Boy and Thursdays Child.

In a dying country town lives Satchel O'Rye, a young man fighting the future; Chelsea Piper, a young woman fighting the past; and a long-lost creature that can teach them both the art of survival. Stripes of the Sidestep Wolf is a shimmering, ultimately joyful novel, a story of journeying towards courage and freedom, of finding the will to live a life beyond expectation.

What listeners say about Stripes of the Sidestep Wolf