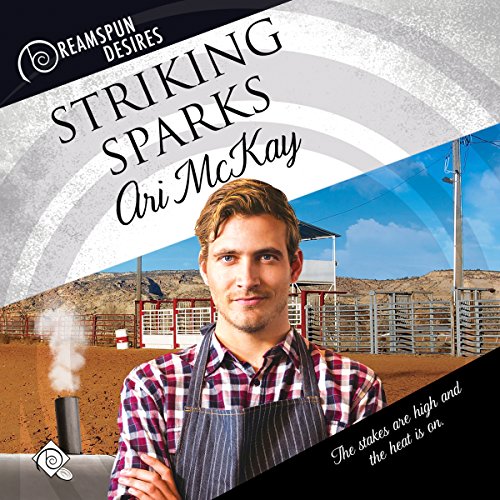 By: Ari McKay
Narrated by: Rusty Topsfield
Try for £0.00

The stakes are high and the heat is on.

Beau Walker, owner of the Barbecue Shack, needs the help of Jake Parnell, his one-time rival and secret crush, in a televised barbecue competition. Beau is a proud man, but the stakes are high, and smart, sexy Jake is his only hope, even if being around Jake reawakens the attraction he's fought for years.

Jake left his hometown, determined to build a life somewhere his sexuality wouldn't hurt his family's restaurant business - and far away from hunky, obstinate Beau Walker. Then his twin, Josh, is killed, and Jake returns to support his brother's wife and children. Despite his reservations, he agrees to go head-to-head against Beau on national television. Between stress and grief, as well as pride and determination, only one thing is certain - the heat between Beau and Jake extends well beyond the kitchen.

What listeners say about Striking Sparks

After the death of his twin, Jake has moved back to his hometown to pick up the pieces of the life his brother left behind. He's cooking and running the family restaurant, and taking care of his brother's wife and children. He's run ragged and is about to reach the end of his rope when he's told about a televised barbecue competition his brother was set to compete in against Jake's enemy, Beau. Jake and Beau have been enemies since high school and Jake has no interest in changing that, no matter how attracted he is to Beau. Beau can admit that he was a jerk to Jake because he was attracted to him and felt that he wasn't as good as Jake. He can see that Jake is hanging on by a string and is determined to help him, regardless of how Jake feels. Neither man can deny their attraction to the other, and forced time together is exactly what they need.

Striking Sparks in an enemies to lovers story, and was really well told! I enjoyed all the characters, both main and supporting. Once the MCs were able to get past the teenage angst, the story moved quickly. I enjoyed this story in audio form, just as much as I did reading it and would definitely recommend either and/or both versions!

If you’re looking for some sweet lovin’ and home cooked BBQ – this is the place to be!

Beau and Jake were enemies in high school and that’s stayed with them in adulthood – mostly due to a Big Misunderstanding – which – thankfully – gets resolved fairly easily. Now, as adults, a lot has happened and they find themselves head to head in a cooking competition that can help them both out, as well as their small town.

It doesn’t take too long for the only two gay guys around for miles to start thinking that maybe – just maybe – they should think about what it might look like for them to be a couple. Well – really – they’ve had crushes on the other for a long time so it’s not actually a hardship.

I loved the way Jake and Beau end up “dating” and how really open and sweet they are with one another without feeling like a total sap fest.

Normally I avoid “reality tv” and “cooking contest” stories because they make me crazy. But I really liked the crew and staff and the show itself in this story. The cooking show wasn’t full of drama – which is a nice change – instead the staff and chefs were nice and helpful and good, interesting people.

The family and town are also full of nice, normal people and there really isn’t all that much drama to be had in this entire story.

The steam is very low, almost entirely fade to black – but I didn’t really miss it. The guys are physical enough with one another that the actual lack of sex didn’t feel like a blank spot.

Rusty Topsfield does a nice job with the southern accents and the emotions. His tone fits the upbeat and light tone of the story and I think he added to my overall enjoyment.

4 of 5 stars for the both book and narration