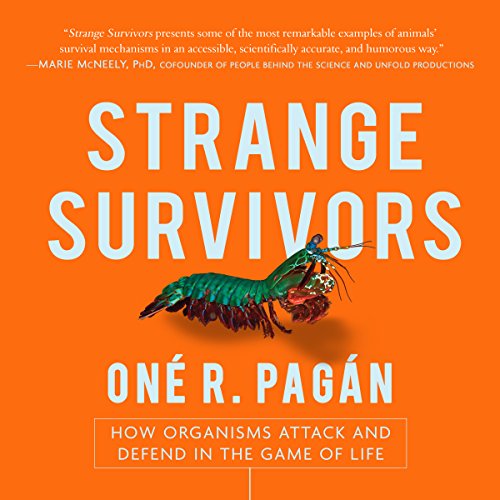 How Organisms Attack and Defend in the Game of Life
By: One R. Pagan
Narrated by: Eric Martin
Length: 6 hrs and 44 mins
Categories: Non-fiction, Biology
1 out of 5 stars 1.0 (1 rating)

By: One R. Pagan
Narrated by: Eric Martin

In the evolutionary arms race that has raged on since life began, organisms have developed an endless variety of survival strategies. From sharp claws to brute strength, camouflage to venom - all these tools and abilities share one purpose: to keep their bearer alive long enough to reproduce, helping the species avoid extinction. Every living thing on this planet has developed a time-tested arsenal of weapons and defenses. Some of these weapons and defenses, however, are decidedly more unusual than others.

Inside this funny, fascinating field guide to nature's most colorful characters, you'll meet killer snails, social bacteria, and an animal with toxic elbows. But Strange Survivors is more than a collection of curiosities - it is a love letter to science and an argument for the continuing relevance of this evolutionary battle as we face the threat of resistant bacteria and the need for novel medical therapies.

Whether discussing blood-thinning bats and electric fish or pondering the power of cooperation, Pagán reveals the surprising lessons found in some of life's natural oddities and how the tactics they employ to live might aid our own survival.

Funny and interesting science for all!

Well written for the science enthusiasts and for those who are not. Easy to follow with solid backgrounds for each section. His choice of creatures and their abilities was marvelous especially how he connected all the details. It was a mini history and science lesson in some cases. I also appreciated his excitement about his subject and that definitely came through in the text and content.

I look forward to Dr. Pagan's next book!