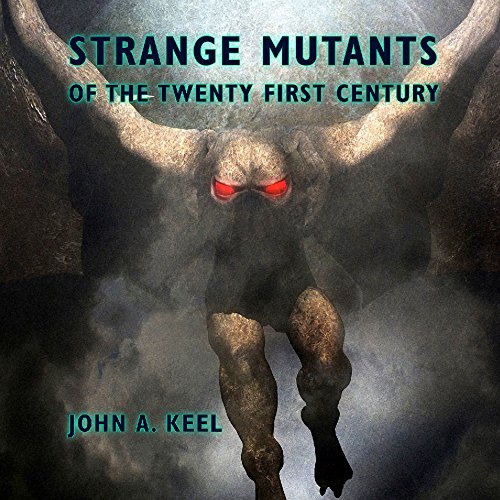 John A. Keel is considered by many to have been a significant influence within ufology and Forteana. He died on July 3, 2009, in New York City, at the age of 79. At the height of his career, he was interviewed by luminaries such as David Letterman, Johnny Carson, and Merv Griffin.

The Mothman Prophecies, perhaps Keel's most famous book, was an account of his investigation into sightings in West Virginia of a huge, winged creature called the "Mothman".

Strange Mutants of the Twenty-First Century contains Keel's very first ruminations on Mothman, as well as a variety of strange reports on black "demon" dogs, phantom cats, Bigfoot and other North American giants, flying humanoids, flying saucers, flying snakes, and even stranger mutants that Keel believed reside with us on Earth.

This book was originally printed in very small quantities over 30 years ago, and became extremely rare and expensive. Finally, it has been available to the general public.

Strange Mutants is a classic listen that provides an entertaining glimpse into John Keel's bizarre world of the unknown.

What listeners say about Strange Mutants of the Twenty First Century

Keel was a gullible old hack with little writing prowess and even less common sense. If anybody ever said something or wrote it down, Keel would herald it as fact, it was that simple for him. I'm interested in the psychology of belief, no longer the actual subject matter which has, to my mind, been proven not to exist in an objective sense, but Keel is true to form in this book and presents nothing of interest other than his own eagerness to believe in the most abject nonsense.

The narration is amazingly bad. Sounding like a cross between Stephen Hawking, Agent Smith from The Matrix and a drunken Brummie in the latter stages of dementia, Mr Chekijian provides this horrible cake with the icing it deserves.

What did you love best about Strange Mutants of the Twenty First Century?

There was a wealth of information, and a lot of firsthand accounts of sightings. This is not something I have ever seen compiled so thoroughly before.

Since this is non-fiction, there weren't any characters, per se, but I enjoyed the voice of the narrator.

He has a "matter-of-fact" voice, like a cross between a newscaster and a host on the Animal Planet. It certainly made a book filled with facts and statistics a lot more interesting!

This was the first time I've ever heard a correlation between UFO landings and Bigfoot sightings... I'm going to go find my tinfoil hat, now!

The only reason that I did not rate a full five stars was that after a while, the repetition of facts and statistics got tedious. This would have been a much better listen if it had been condensed into a two to four hour listen. The voice actor did a great job, and perhaps some day, an abridged version of this book can be released.

This is a fun travel through the centuries.We get to hear of all the monsters that may or may not have been proved to exist by science.I liked the way scientists were explained for this reading.
Jack Chekijian is a wonderful narrator and does a fine job with this material.
I was given a copy for free for an honest review.

I received this audio book as a gift in exchange for a honest and unbiased review. This book is about the odd, strange creature reports through the last one hundred years. From big foot to aliens, it's all there. I enjoyed listening to this narration of this book. Some of it had me shaking my head at human behavior and some had me saying "Oh My!". I would hope that now we have evolved enough that should we come upon a creature we don't know or understand, that we would approach it with kindness, not shoot first and ask questions later.

The author, John A Keel had his work cut out for him with all the research for this book. It is well written though not always exciting. The narrator, Jack Chekijian as always does a great job delivering the material to us flawlessly.

A fantastic fun listen you will be sorry is over ... Until you play it again and again!
The narrators enunciation is flawless and drolls just a tad that reminds you of the Mr. smith character in the Matrix

Not only for followers of John A Keel

Fascinating presentation of seemingly unexplained oddities viewed by witnesses in the late 20th century. While somewhat dated by nature, it does open the mind to look for documentation of current findings. A number of the mutations evidenced here are deemed to be the result of radiation, but current studies are more apt to point toward chemical contamination. Read, giggle if you must, but check out some of the current science and do some thinking.
Narrator Jack performs this piece with all the professionalism one has come to expect from him.
It does make a great gift

I love these stories

"Strange Mutants" was an interesting listen. I enjoy the different stories from the U.S. and around the world of sightings of the Yeti, Bigfoot, Mothman, UFO's, demon dogs, vampire bats and other strange creatures. Disappearing cattle, flying snakes, and other elusive animals make for great listening. I love the subject therefore I can never get enough of the stories.

I watch TV shows with similar content and there has been legendary sightings and some proven evidence. I grew up with the story of the Goatman and the Aurora incident so nope, these stories never get old.

I enjoy John Keel's work. I find it all fascinating and sometimes a bit frightening. There are too many claims for there not to be something out there. This would be great to listen to on a camping trip also.

Jack Chekijian does an excellent job with Keel's work. I like his narrating style and I always look forward to him voicing these audiobooks. Another great job!

What aspect of Jack Chekijian’s performance would you have changed?

I hate to be a jerk, but the narrator sounds like he's doing an impression of Chicken Lady from Kids In The Hall. That strange cadence of rising emphasis on the last few syllables of a sentence .. it takes me out of it. Other than that it's fine.

The narration was not good. He had a weird, halting speech pattern that was hard to listen to. However, the book was just fine; I specifically wanted to hear this John Keel book.

Update -- this narrator is so bad I cannot re-listen to the book!

Not in my taste

Sadly this book was not for me. The author has written a lot of books in the paranormal genre so I hope and believe there will be a book for me among his writing
ReadingGhost book reviewer