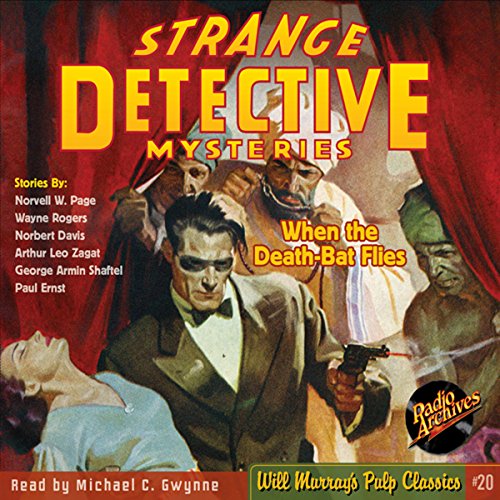 In the Fall of 1937, Popular Publications launched a new type of detective magazine, one that combined the weird-menace-style stories that had made Terror Tales and Horror Stories so hot with readers with hardboiled detective-action tales.

They called it Strange Detective Mysteries.

In his first-issue editorial, managing editor Rogers Terrill set the stage: "Remember the time you read that one perfect knockout detective story - bizarre, mysterious, thrill-packed, different? It still remains the detective story for you. You've wondered why you never found another. You searched bookstores, library shelves, newsstands - but you just couldn't find that brand!

"Beginning with this issue - we give you Strange Detective Mysteries - not only one bizarre, thrilling, eerie-laden mystery story such as you've searched for, but a whole magazine full of them!

"Because you have sought for this highest type of detective story, without finding it, you can understand at what cost we bring you this magazine. Months of planning and effort have gone into its making. The best-known and most-able detective-story writers have been called upon - for their best. Only the smallest proportion of a flood of manuscripts has been chosen.

"Crime-detection, adventure, baffling mystery - all this you will find in Strange Detective Mysteries. In addition, you will find that quality which appears in a detective story only once in a blue moon - the bizarre!"

Terril served the word bizarre no less than five times in his editorial, italicizing it twice. He was serious! Strange Detective Mysteries was beyond weird.

For his lead story, Terrill served up "When the Death-Bat Flies", by the writer he called "America's No. 1 Master of the Extraordinary Mystery Tale", The Spider's Norvell W. Page. Starring master magician Aubrei Dunne, it was a wild excursion into a criminal cult dedicated to murder and mayhem.

In "Madame Murder - and the Corpse Brigade", Paul Ernst offered an even more bizarre hero - Seekay, the man with no face!

The detective protagonist of Wayne Rogers' "The Headman's Hat-Box" witnesses a murder committed by - himself!

In George Armin Shaftel's "The Miracle Murder Case", a prison break is engineered by an unknown mastermind who terrorizes society with a weird super-weapon!

Terror Tales favorite Arthur Leo Zagat's "Patents for Dr. Death" revisits the realm of Jack the Ripper - but with a weird twist.

Finally, Norbert Davis' "Idiot's Coffin Keepsake" takes us to a weird mansion and the grisly mystery of the missing hand.

Narrated by Michael C. Gwynne, Roy Worley and Roger Price, this RadioArchives.com audiobook brings to vibrant life one of the most exciting first issues of any pulp mystery magazine ever published! Don't miss it!