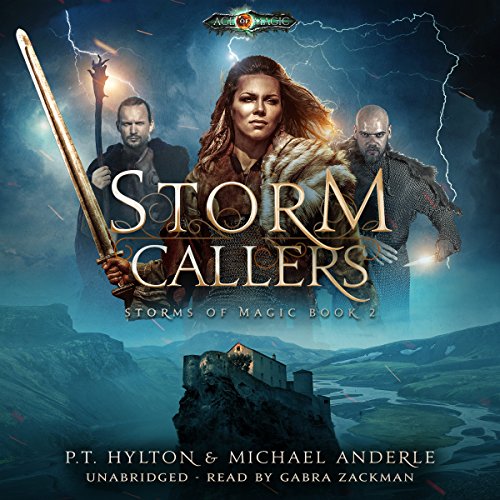 When the storm clouds gather, only the bravest answer the call.

Abbey and Dustin head to the Storm Wall to investigate a series of Barskall attacks. They arrive in the midst of a battle and discover an unlikely ally. They soon learn of a powerful weapon they can use to stop Dahlia and her seafaring pirates...

If they can find it in time.

The search will take them deep into enemy territory where their only hope for survival is the resourcefulness of their small but feisty crew.

As they race to find the weapon, a mysterious group of Storm Callers threatens to take over the seas and pave the wave for a whole new breed of Storm Raiders.

Set on the foundation laid by the Kurtherian Gambit Series, Storm Callers tells an entirely new story in the Age of Magic - and of the heroes and villains who battle for control of its destiny.

What listeners say about Storm Callers: Age of Magic: A Kurtherian Gambit Series

I love Michael Anderle and Gabra Zachman, so I figured I couldn't lose. Now I am a HUGE fan of PT Hylton! Please keep them coming PT, this is a great series!

Abbey, Dustin, and many from the first book are once again after the Barskall. Unexpected allies join forces to defeat the drugged brutes. Abbey's prior accomplishments in battles are recognized when she gains an opportunity to lead a field expedition. Plenty of action in this story to keep anyone's interest.