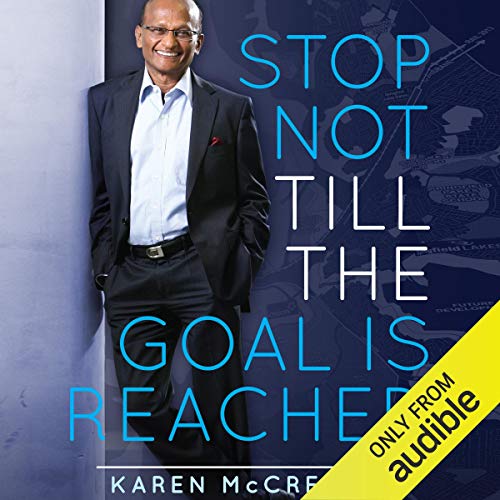 Stop Not Till the Goal Is Reached

The 10 Principles for Fearless Success That Inspired Maha Sinnathamby to Build a City
By: Karen McCreadie
Narrated by: Lucy Price-Lewis
Length: 9 hrs and 28 mins
Categories: Business, Career Skills
5 out of 5 stars 5.0 (3 ratings)

Stop Not Till the Goal Is Reached

From humble origins as a Sri Lankan raised on a small rubber estate in war-ravaged Malaysia, Maha Sinnathamby migrated to Australia some 40 years ago and has faced countless obstacles and many failures. Yet through fierce determination, unrelenting drive, sheer hard work, and extraordinary vision, he has an enduring legacy of community-building achievements to his name and was listed within BRW’s 50 Most Wealthy Australians in 2011.

In 1992 Maha’s private, under-capitalised firm purchased 2,860 hectares of inhospitable, inaccessible land in an economically depressed region of Queensland, Australia. Two decades later, despite innumerable setbacks, Springfield has emerged as Australia’s largest privately-owned, master-planned city; and is a striking example of what’s possible when you design a city exclusively around the needs of the community.

Stop Not Till the Goal is Reached explores the 10 principles for fearless success that have guided Maha throughout his life. It explains the principles through Maha’s personal journey and provides other examples of astonishing achievements from around the world.

One of the great books that truely inspires!

The ideal book for someone looking for a reason to get on the go and never look back. A good recipe to overcome self-doubt and keep on tract to the realization of your dream. Recommended for all aspiring visionaires.

Now one of my favorite books

As a young developer working on small development deals this book was amazing. it showed the power of thinking big and supplied me with mind set that help me solve some problem I was having with my project.

I highly recommend this book, its an amazing story