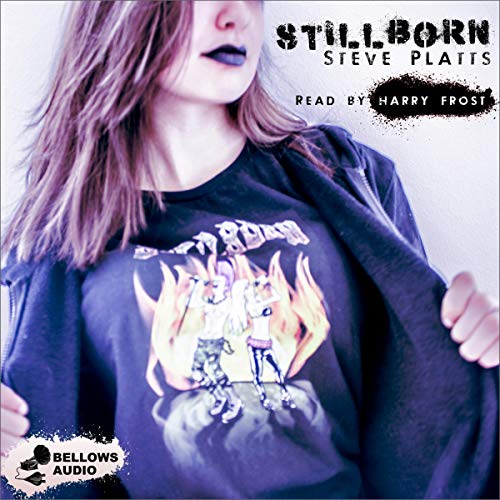 Carl Harper, a teacher living in South Dakota, has done just about everything possible to escape his past. Unknown to his friends, his colleagues, and his students, Carl was once the depraved frontman of the needlessly controversial British punk band Stillborn. When Jessica Millar turns up to her Saturday detention, fresh from her vacation in England, she is wearing one of Stillborn's T-shirts, and slowly but surely the rickety shack of lies and self-deception Carl has made from himself crumbles to the ground.

What follows is a story of terrible music, worse drugs, attempted murderer, successful manslaughter, and plenty of bad language. What follows, in short, is a story that most certainly should not be shared with an impressionable 16-year-old girl and the consequences for his little confessional prove dire.

What listeners say about Stillborn

Wonderful story!! I super enjoyed it! Great narration and interesting plot :) Many thanks!! X

This is a clever story, just the sort of book to attract younger readers, or indeed, reluctant younger readers. There are memorable characters whose relationships as the hodgepodge members of an 80s punk rock band seem believable. Harry Frost's narration is engaging, relaxed and well paced. He seems to enter into all the characters effortlessly, even though an extensive variety of accents is required. Though he has a fairly low voice, even the female characterisations are credible.

This was a very interesting book. I think if someone likes a morally gray story, morally gray characters, or stories about the rock star life, Stillborn would be a great listen. The moral grayness comes from the relationship between the teacher and student. It is strange and not typical. I know growing up our family got close with different teachers and their families. We would hear stories of them growing up and what they did before they were teachers. It was always interesting. This relationship in this story is just so sudden. I don’t think I would tell someone I just met about this part of my life much less a new student in my class. What I did like about this was the story did not have a slow start. The rock star story is fascinating, and I think what many envision when they ponder on the darker sides of the rock star lifestyle. The musician lifestyle story line was the storyline I far preferred, and it made up the majority of the story. It is tragic but well written. I get that there needs to be a reason for the musician to tell his story, but I find the relationship disturbing, and I think that was the intent. The ending was very interesting. Harry Frost does an incredible job with the narration! His voice is very pleasant to listen to. On top of that his accents are great and voices between characters are very distinct and consistent. I would easily listen to another book by him. I received a copy of this audiobook at my request, and I have voluntarily left this review.