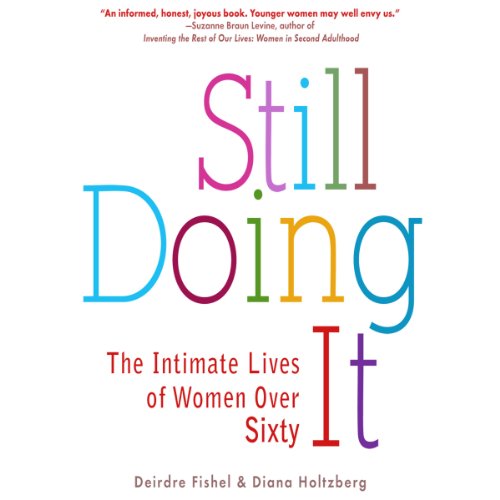 When Deirdre Fishel and Diana Holtzberg began work on their documentary Still Doing It, they knew they were catching a wave. The women of the baby-boom generation who had been so outspoken about sexuality and freedom were about to turn sixty, yet no one was talking about the revolution in aging. Nor was anyone letting on about the big dark secret that women born before the boomers, even way before, were a hell of a lot more vital than the images we were getting, and many were still having sex-and loving it! In Still Doing It, Fishel, Holtzberg, and the incredible women in their documentary broke the silence.

Now they are back, with a stimulating and eye-opening book that offers a deeper look at women who break every stereotype we have about sex and intimacy. These women are dynamic, confident, opinionated, and wise. They're also having the kind of intense sexual experiences and fantasies we never associate with grandmothers. You'll meet Betty, who met her live-in boyfriend in an online chat room when she was sixty-nine and he was twenty-two; Joani, age seventy, who shares her boyfriend with another woman; and Frances, who encountered the intellectual and sexual love of her life at eighty.

Today's women are living longer, healthier lives, and their appetite for sex and adventure isn't fading. Aware of their mortality, they understand just how precious life really is, and are willing to take risks to go after what they want. Challenging stereotypes about older women, Still Doing It lets everyone know that sex and adventure do not need to end when you hit sixty (or seventy...or ninety!). In fact, the good stuff is often just beginning.

"An informed, honest, joyous book. Younger women may well envy us." (Suzanne Braun Levine, author of Inventing the Rest of Our Lives)
"Sex, love, and life can grow even richer as we grow older, and the stereotype-busting women in this book show us scores of ways. These women are not going downhill, they're on a roll. They are women of juice and wisdom-and living proof that the best is yet to come." (Gina Ogden, PhD, author of Women Who Love Sex, The Heart and Soul of Sex, and The Return of Desire)

What listeners say about Still Doing It