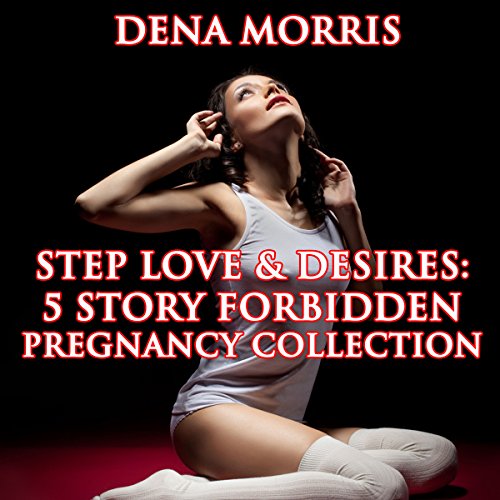 "The Man of the House Is Too Big for Me" is the story of a young woman who vows to her friend that she will make love to her boyfriend. Her friend convinces the woman to try her seduction abilities on the man of her own house first. In a twist of plans, it is the man of the house who decides to take the lead, and after a few weeks, the young woman finds herself blessed with a gift that she can care for - forever.

"The Man of the House Cannot Fit Inside of Me", is the story of a young woman who is interested in learning about becoming a submissive. The man of the house and another young man are only too willing to teach her and reach their goal of impregnating her. She loves her new way of life, and in a few short months, has a surprise gift to love and cherish always.

"Dreams of Being Inside of Her", is the story of a young woman who tells her roommates that she watched a very stimulating movie about men making love with a woman who is dozing off on their couch. They made all her known fantasies come true, but she doesn't really realize it fully until the next day. A few weeks later, the woman discovers that her life would forever be changed.

"Begging for Tasty Semen" is a story about an 18-year-old who absolutely begs an older man for his attention because she finds him incredibly attractive. He's happy to oblige her as she wants, which happens to be repeatedly. The story ends with a nice little bonus bundle in a few months.

"He Doesn't Pull Out of Me" is a story about the lust a man of the house has for a very sexy young lady. When she is drowsy on his couch while she is babysitting at his home, her vulnerability is too tempting for him to resist. During the night, he makes love with her repeatedly, in positions and locations he has always dreamed of using to make a young lady pregnant. A few weeks later, she is blessed with news about something she'll be able to love and care for.

I laughed the whole time!

I'm sure the story is great but I wouldn't know because i was laughing so much due to the amazingly horrible narrator. This should be listed under comedy. Maybe if they found a narrator that could actually read the story as it is written it would be better. Of course I must admit having not seen the actual story as it is written I'm open to the possibility the author inadvertently entered thousands of extra commas thus forcing the reader to destroy the flow of the story.

She reads like 4th grader and pronounces so many words wrong. It was distracting. The stories are pretty good. Short and gets to the parts quickly. Seems a little male-pleasure sided. Wish they were a little less, giant dick virgin themed. Some of the girls should be knowingly naughty and experienced.

The stories weren't the worst I've ever listened to, but the narration made it so hard to get into the stories.

I feel bad for saying this bc I get the feeling this narrator is still learning, but it was so awful to listen to.

Where does Step Love & Desires 5 Story Forbidden Pregnancy Collection rank among all the audiobooks you’ve listened to so far?

I love everything written by Dena Morris, and narrated by Elizabeth Meadows

What was one of the most memorable moments of Step Love & Desires 5 Story Forbidden Pregnancy Collection?

how there are 5 stories inside of the book, so I'm not bored with just one book

What does Elizabeth Meadows bring to the story that you wouldn’t experience if you just read the book?

She brings emotion to the book, and at some points, it really sounded as if she was turned on!

Had a great time reading this book and will be looking for more by both the author and narrator!