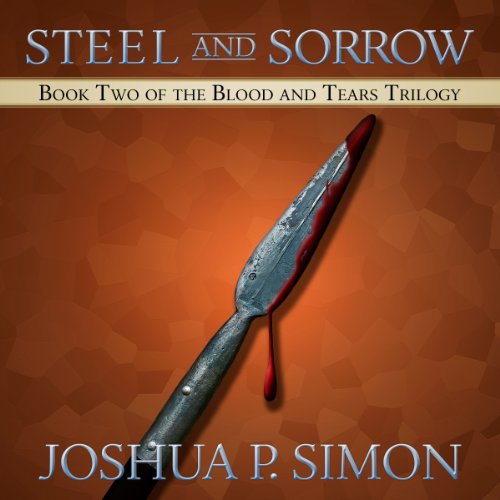 Steel and Sorrow: Book Two of the Blood and Tears Trilogy

By: Joshua P. Simon
Narrated by: Jonathan Waters
Try for £0.00

A Warleader proves his worth, a High Mage seeks revenge, a Commander overcomes his past, and a Queen solidifies her rule.

On the continent of Hesh, Tobin has finally gained the two things that have always been out of his reach—the respect of his clan and a woman’s love. He now seeks to finish what his father began. When Tobin faces an enemy he never knew to suspect, he is left questioning not only his ability to rule, but also his sanity.

A High Mage has been humbled, but he has not been defeated. After spending his time devouring the history of Hesh, he’s discovered a way to return home and reclaim what was once his. But before he exacts revenge on his enemies, he fulfills an obligation to his one remaining friend.

In the aftermath of great tragedy, Kaz has taken the role of commander, and with it, a mountain of headaches. He expected threats from his enemies. He did not expect the largest headaches to come from within his own ranks. To make matters worse, the faded memories of Kaz’s previous life are returning and what he sees haunts him.

Queen Elyse’s kingdom faces collapse at the hands of a civil war. While her army has been organizing to secure the crown against traitorous lords, she has worked at her role as queen. Suspicion of traitors among the ranks of her council threatens to undermine Elyse's authority when a chance for peace presents itself.

A year after the events of Rise and Fall, Steel and Sorrow is the second book in the Blood and Tears Trilogy.

What listeners say about Steel and Sorrow: Book Two of the Blood and Tears Trilogy

This trilogy really sucked me in. During the first book I was unsure but then it ended in a way that I needed more. I’m not a fan of cliffhangers but since this series is already published I can forgive the author 😂
The turmoil and stress of war continues in the battles of the brothers. It’s an intriguing story because they don’t even know they are on opposite sides. All the characters are so much fun and clever I’m find myself drawn to each one. I’m not even sure who’s side of the war I’m on. The narration is absolutely amazing. Jon E Waters performs this story and each character with such skill that you truly feel like you’re living it. There’s sorrow & despair because let’s face it, it’s war so be prepared. This is book 2 and is not a standalone and must be read/listened in order. I recommend this book/series.

Author went to the same plot as most books

I was disappointed that the characters were so transparent in their agendas. It was Soo easy to see where story was going and where the evil characters were plotting. I do Not like a Story that is this transparent, because there is no erge to finish the book when it is obvious what is happening even though the Characters are blind to it all. I read/listen to a Story for entertainment not to get upset that the Characters can not see what is happening right in front of them.

much preferred this one over the first book. it was quicker and a lot happened. plenty of character development and good narration

I am again in awe and drawn into the second book in this series.
It continues to keep you intrigued and wanting more.
The narrator did a fantastic job.

This is an awesome series with excellent writing and narration. An epic fantasy tale that would make an awesome movie.

this second installing flows right along. the twists and turns keep coming and layers of plot are exposed. There are a lot of original ideas in this series and some classic action. Is it political? is it action? is there magic? is there love? the answer is yes. this book has everything a reader could want. I highly recommend the series and want to see more from this author in the future.

A this saga continues I am brought in to the love and misery that went on in this clan. So much put on such a young girl. Excellent story superb Narration I can’t wait to continue with number three. I would recommend this book to everyone once you started you won’t be able to put it down until it’s finished.