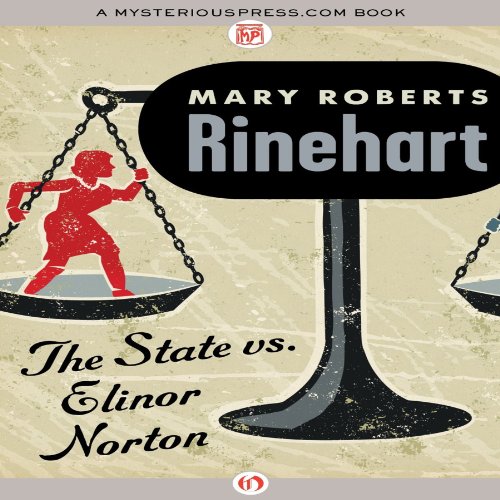 The trial was a media sensation. Right from the start, Elinor Norton had confessed to committing the gruesome murder. But was it the truth? What had actually happened that dark afternoon on her bleak and isolated estate? And when the jury handed in its verdict, would it read guilty or innocent?

What listeners say about State vs. Elinor Norton

Gloom and doom is hard to listen to (3.5 stars really) but it is Rinehart

For die hard Rinehart fans. Do not make this your first Rinehart novel.

I had a difficult time rating this particular novel by MRR. It was so hard to listen to, the unrelenting pending doom that overhangs every chapter. I decided that I could not say I exactly liked it. It is the novel itself that is getting the rating and not the reader, Stephen Hoye, who does a fine job.

It is a recounting of the life of a character named Elinor Norton, from childhood to the point at which the novel ends, by a male character named Carroll Warner. They were friends from meeting during childhood, despite the disapproval of Elinor's social climbing and cold mother, Caroline. Elinor's father, an ambassador, died when she was very young, leaving her to be raised by her merciless cold mother. There are many villians of different degrees in this novel who contribute to the misery of Elinor's life that ends in her trial of premeditated murder of a man who really deserved to die. Besides her mother, the two chief villians are Lloyd Norton, who Caroline forces Elinor to marry because he has the proper social standing, and the man Elinor eventually kills, Blair Leighton, who takes so much from Elinor and gives her nothing back in return.

Lloyd Norton was never a very good husband but after coming back from serving in the army during WW1, he was even worse. Not insane exactly, but damaged psychically. His ego was destroyed because his ego had depended on his social status which counted for nothing in the army. He had also lost most of his money which had been invested poorly. Lloyd also became convinced that Elinor was cheating on him. He had cheated on her but she had not cheated on him, although she was deeply attracted to Blair Leighton, a perpetual playboy. Lloyd decides he needs to leave NYC and the East Coast to "recover" and hits on the idea to buy a ranch in Montana. He is talked into this by Blair Leighton.

The irony is that Lloyd never suspects Blair Leighton in his ravings about Elinor being unfaithful, that Blair is the biggest threat to him, to Lloyd. All three of them end up in Montana on the ranch. Only Blair is happy there.

The part about the ranch life seems to go on forever. They do not live near any of the bigger cities in Montana (which I have visited), but in some dry desolate remote part of Montana where life was especially hard and lonely in 1920. The first year is somewhat successful for them. The following years are miserable.

When I got to the end, I realised why the author chose to have the character, Carroll Warner, be the first person narrator of the book instead of Elinor, herself. I was glad I had listened to this novel, wading through the sad years of the life of these characters, to the end of the novel. It was not an easy listen, the way many of her other novels are, not fun like many of the others. About 3/4 of the way through, I sped up the narration speed. I should have done it sooner.