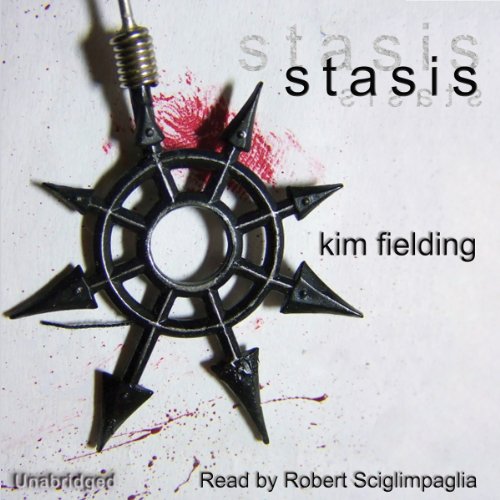 By: Kim Fielding
Narrated by: Robert Sciglimpaglia
Try for £0.00

Praesidium is the most prosperous city-state in the world, due not only to its location at the mouth of a great bay, but also to its strict laws, stringently enforced. Ordinary criminals become bond-slaves, but the Wizard places traitors in Stasis, a dreamless frozen state. Ennek is the Chief's younger son. He has grown up without much of a purpose, a man who cannot fulfill his true desires and who skates on the edge of the law. But he is also haunted by the plight of one man, a prisoner for whom Stasis appears to be a truly horrible fate. If Ennek is to save that prisoner, he must explore Praesidium's deepest secrets as well as his own.

What listeners say about Stasis

Would you listen to Stasis again? Why?

Absolutely! Kim Fielding's fantasy story of a young boy, Ennek, who is the second son of the Chief or Praesidium. While taking a tour of a special prison, he is intrigued by one of the inmates, all of whom are in a state of suspended animation, or stasis. He touches the man, and despite his condition, the man feels the touch and dreams of the boy. Many years later, when the boy is in his late twenties, he once again comes into contact with the man, Miner, and agrees to work for a Wizard in return for bringing Miner out of stasis. He keeps Miner in his rooms for a year. During this time, he is developing his own Wizard powers and learns that his powers are great, but he does not know how to use them properly. An incident occurs that forces Ennek and Miner to flee Praesidium, leading them into more trouble at the same time that they realize they are in love with each other.

I love M/M books where authors take a story that would normally be told with a Male and Female protagonist who fall in love. Action, adventure, thrillers, Sci-Fi and Fantasy, it's always that way. So finding a great story like this where the protaganists are two men is wonderful. It's too bad these kind of stories were not available when I was young. All we had were a handful of brave authors, but the stories were always filled with hopelessness and loneliness of gay men.

The narrator. Wow! He read like he was speed reading through most of the book, then finally slowed down a bit for about the last 25% or so. Most of the voices all sounded the same - gruff older men with gravelly voices and always the same voice. Ennek and Miner were done a little bit better, but not much. He ran sentences and paragraphs together, including where there would be a break within a chapter. I would realize that something was changed, and if I played it back, realized there had been a break and we were onto a new section. Many times things didn't make sense because of this and I had to play them back to figure out what was going on!

This is Book 1 of a trilogy. Knowing that Book 2 has a different narrator (whom I love) definitely makes me want to continue on with the series. Don't get me wrong, Kim Fielding's wonderful writing and storytelling, as well as the great characters are reason enough to continue on!

I loved "Brute" and maybe that made me expect too much of this book. Its not a bad story, really. But it doesnt feel like a lovestory and I dont think that you get to know the MCs very well. All the parts are there but you really dont feel connected. It seems to me to be more a story of the MC breaking free from a live he really dont want than a lovestory, and eventhough there is nothing wrong with that storyline, it wasnt what I expected and bottomline is I expected to be moved by the story and wasnt, so a little dissapointed.
Narrator good.

I don't know if it's the cadence or the quality of the narrator's voice, but he puts me to sleep. I'll try this in print instead. The story itself doesn't seem terrible, but WOW.

What did you love best about Stasis?

The original plot in the fantasy world. Well developed charachters with a quite nasty antagonist. A story of a world that uses and accepts magic as part of the everyday.