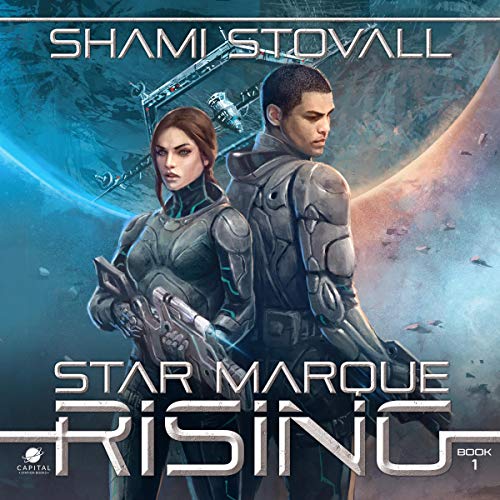 The future is governed through a genetic hierarchy - superhumans at the top, humans and defects at the bottom.

Clevon Demarco, a genetically modified human, has a cocksure attitude and the combat skills to back it up. With his unparalleled skills, he makes his living as a ruthless gunrunner on a shady space station near the edges of the quadrant. Stronger, faster, and wittier than most sad sacks, no one even comes close to Demarco's abilities - until he crosses paths with the captain of the notorious Star Marque, Endellion Voight.

Captain Voight arrests Demarco and offers him a choice: go to a prison planet for his crimes, or join her starship, the Star Marque, working as mercenaries for the superhumans. But she didn't pick him at random. She has a plan to become a planet governor; a title no human has held since the superhumans won the war. It doesn't matter the cost - assassinations, extortion, blackmail - she's determined to claw her way to the top.

All Captain Voight needs is Demarco's help to carry out her machinations, and she'll give him everything he's ever wanted in return.

A fast-paced space opera for those who enjoy Old Man's War by John Scalzi, Revelation Space by Alastair Reynolds, or anything by Robert A. Heinlein.

Wow this was amazing!

The narrator definitely helped convey the correct tone and nuance of this story. It was one of the best sci-fi/action books I have listened to this year. It was hard boiled and tough as nails. No one is innocent, just different shades of grey. I was given this free review copy audiobook at my request and have voluntarily left this review.

Action packed and perfectly paced with great worldbuilding. Moreover the characterization was excellent with multiple moral questions being raised. Science fiction at its best. The narrator did a good job. I received this free audiobook at my request and have voluntarily left this review.

I love this book and was so excited when I saw it was now available as an audiobook.

This story has lots of action that hooked me from the beginning and kept me guessing until the end. The characters are all believable, and I love the universe they are in. It is a great story.

Loved the story but the unedited mistakes and restarts messed with the flow, once fixed should be fine.

This was a great book, the story was great. The narration was great. And it left with a great cliff hanger! Cannot wait for the next book to come out! I was given this free review copy audiobook at my request and have voluntarily left this review.

The old version had weird pauses and breaths, but this updated version has cleaned that all up - no weirdness.