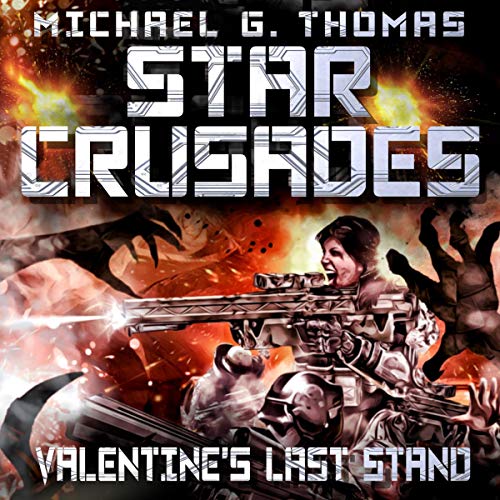 By: Michael G. Thomas
Narrated by: Nathan Tarantla
Try for £0.00

Valentine and her Novas are back in action as they defend the Martian moon of Deimos from a massive Ski’lig invasion.

The Ski’ligs are back in force, and this time they’ve brought an armada with them. Epsilon Eridani has already fallen and soon the Alliance are in full retreat back to Terra Nova, where they can rally a force strong enough to deal with the unexpected attack. Earth and Mars are alone as they prepare to sell their lives dearly. But Valentine has a plan, one that will spare the colonies of Sol, and force the enemy to deal with the Novas on their terms. It is a plan that Captain Olik relishes to carry out, and leaps into action.

The Novas head for the Martian moon of Deimos, the control facility for the Spacebridge to Eridani Prime. If the Ski’ligs are to receive more ships and soldiers they will have to take Demios and reopen the bridge. Captain Olik and Colonel Burnaby shut it down, trapping the vanguard of the Ski’lig fleet at Sol. The Novas and Marines work together along with a hastily mobilised citizen militias to defend Deimos, no matter the cost until help can arrive. What follows is a siege like no other, where the Ski’ligs throw everything they have at the defenders hidden deep underground and will resort to weapons so horrific they’ve been banned for centuries.

Star Crusades: Valentine's Last Stand is the third book in a brand-new saga in the style of Starship Troopers, Aliens and Predator. A story which will take the listener to new worlds, to face new and deadly threats to the Alliance. This is an epic story with incredible characters and even more incredible and advanced technologies.

3rd book in this series and I still love it. Great story and a bit of escapism with a great story line . Well narrated and well worth a listen to .Cant wait till the next one