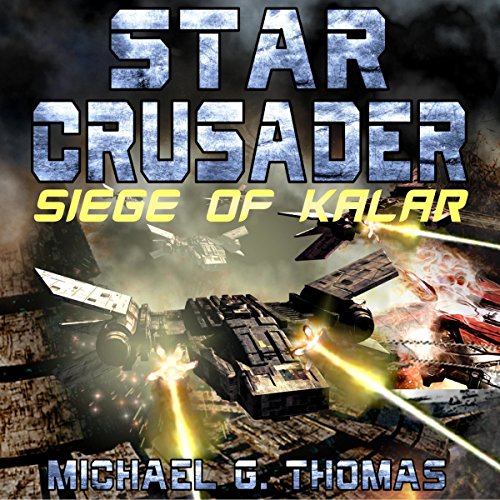 Nate and his friends in Ironclad Squadron are returning to the fleet when they detect a mysterious signal. Sensing a trap, Colonel Gun sends Nate out alone in his captured fighter to scout the source. The signal is emitting from inside the heart of the abandoned Kalar Anchorage. This massive facility was once the Byotai Empire's greatest shipyard, but now it lies cold and lifeless. Or does it? Upon arrival Nate runs headlong into the center of a fierce battle. On one side are the numerous forces of the insidious Orion Interstellar Empire. On the other, the powerful attack cruisers of the Byotai outlaw, Warlord Katanga.

Kalar Anchorage has become a refuge for the lost and the damned. The former facility is populated by displaced people and wounded soldiers that have fought, and lost against Star Empire incursions. As well as the exhausted crews of a number of ships. Yet the forces of Katanga, though weakened by the fighting, still wish vengeance upon those that seek their utter annihilation. Katanga's desire for further violence may come earlier than expected. An entire fleet along with numerous ground forces has entered the system, and they will not leave until every defender is dead or captured. With no time to fully abandon the station, the preliminary skirmishes erupt into a major battle. The last stronghold that stands between the Orion Interstellar Empire and the hastily mobilized fleets of the Alliance. The Siege of Kalar has begun.

What listeners say about Star Crusader: Siege of Kalar

The galactic battles continue in this fast paced military S.F. series, with enough action to satisfy the most ardent fan. Without being overly technically detailed, the fight scenes are exciting as the dreaded Star Empire push forward. And there are surprises in store with the discovery that not as many Byotai ships had been destroyed as previously believed - and they are commanded by the legendary Warlord Katanga.
Although this can be heard as a standalone, the plunging directly into battle status is initially confusing without knowledge of the previous books. But only briefly, as the individual characters emerge in their distinct situations. The writing is thrilling, if a little Boys' Own in style, with some silly sentences such as , "...She pushed her body to the limit, and then further." But, overall, good fighting fun.

Narrator Andrew Wehrien helps bring tension to the action with his fast, intense reading and his dramatisation of the various protagonists breathes life into individual personalities. A good performance throughout which definitely enhances the written text.
My thanks to the rights holder who gifted me my copy of Star Crusaders: Seige of Kalar, via Audiobook Boom. I enjoyed the quirky incidents amongst the battles and, although not the best, this is a worthy inclusion in the battle for the stars of military fiction.

Hard to follow if you haven't read the other books

I got this book because Andrew Wehrlen narrated it. It was a good book, I enjoyed it. It did start off somewhat slow. It's supposed to be a stand alone story but you really do need the background from the series to understand it. Otherwise it's hard to follow.

I have other books narrated by Andrew Wehrlen, I really love how he brings the books to life. Great performance.

Star ship battles at their best

Welcome to a galaxy at war. Space battles, ground battles, drama and romance abound. Alien races, crazy tech and more. If your a sci-fi fan who loves a Star Wars/Star Trek style romp through the galaxy then this is for you. Great series well written and well narrated. Listened to many of them and enjoyed them all. I was voluntarily provided this free review copy audiobook by the author, narrator, or publisher.

Entertaining, engaging and enjoyable. Another great addition to the series and the continuing intergalactic adventures of Nate and his crew.

Full of action, space battles, suspense. If you enjoy intergalactic military stories that are not full of overly technical jargon, has a great well rounded cast of characters, a good story and is entertaining this is a good series.

The Ironclad Squadron have been through their share of battles. It's not in their nature to back away from a fight or give up. This time is no different.

Technically, I would say that the story can be read as a stand alone but it is the 6th book in the Star Crusader series. If you have not read any of the previous stories it may take a bit to get all the characters straight.

Andrew B. Werhlen once again does a fantastic job with the narration. Pleasant voice. Easy to listen to for long periods of time. Clearly spoken with a smooth even pace. Wide range of great character voices. Perfect tone and delivery. He pulls you into the story and brings it to life through his narration. Very enjoyable

Enjoyable listen. Liked the story and enjoyed the interaction between the different characters. I received this audiobook for free through Audiobook Boom for my unbiased review.

A Fun Ride after a Slow Begining

It took me a while to get into this story. There were a lot of new scifi-esque names thrown around in the beginning that was jarring and difficult for me to get through. I probably would have been just fine if I had not been new to the series and had listened to the previous book. That didn't last long however, and the story and the characters easily provided the opportunity for me to become entertainingly engrossed until the end.

I was voluntarily provided this free review copy audiobook by the author, narrator, or publisher in exchange for an unbiased review.

Good, if not great

Its ok,but not the best for stand alone. Too much background info needed to make it a story you can just jump into.

As one of larger set of stories there is not much that can be done without overloading the book with background info..

First, to get it out of the way I need to post this “I was voluntarily provided this free review copy audiobook by the author, narrator, or publisher.”
With that done I'll start by saying I had not incountered this author before. That with starting several stories along in Michael's series I found it hard to be drawn in for several chapters, and alway felt somewhat lost. Still, this book is worth your time if you like military SF. but I would recommend starting at the beginning.

This is a great series for those who don't like a lot of complex science, hard to follow story lines, dozens of different characters, or drawn-out discussion. These books are relatively simple but great for someone who just wants to listen to military space sci-fi without all of the fluff.
This was another great Star Crusader book full of action, space battles, romance... and did I mention action?

I really would not start with this book. I think the reader will be lost without the backstory that leads up to this point. The others are just as good though.

The narrator for this series is quite good. He has a good pace, tone, and is exactly the right voice type for the main character.