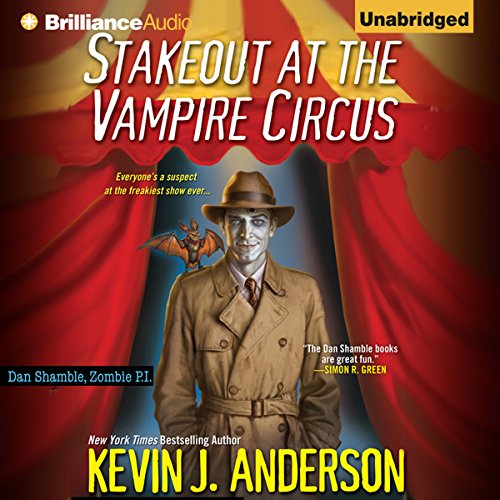 Stakeout at the Vampire Circus

Stakeout at the Vampire Circus

Zombie P.I. Dan Shamble and his ghost girlfriend are called to the Vampire Circus when a fortune teller’s cards go missing. Not exactly the glamorous life, but the stakes escalate when a vampire trapeze act goes dead wrong, and Shamble discovers even more skeletons in the closet than the ones that live there. As he shuffles for clues through an unnatural cast of carnies, he faces a slate of suspects that could freak out even the most daring detective - a werewolf lion tamer, a fat lady with an enormous secret, an undead ringmaster…and what could be scarier than a circus clown? The only thing certain is that the show must go on - dead or alive.

What made the experience of listening to Stakeout at the Vampire Circus the most enjoyable?

The story is pretty light weight and short, but the ending is fun and the ongoing evolving personalities of the characters is enjoyable to see.

What does Phil Gigante bring to the story that you wouldn’t experience if you just read the book?

Phil is a great narrator, engaging and amusing. The voices added for characters brings them to life.

I enjoy listening to the books in my car and when I work out, so I am not concerned about listening to it in one sitting.