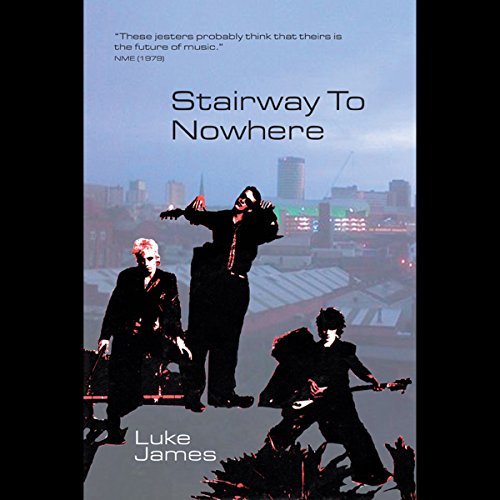 Stairway to Nowhere is the true story of late 1970s, Birmingham, UK, band Fàshiön. In the brief spotlight of their 15 minutes of fame, Fàshiön toured both the US and UK as an opening band for The Police, did a UK club tour with a then-unknown band from Ireland called U2, opened for The B-52s on their first-ever UK tour, and had a new band called Duran Duran open shows for them.

The book tells the story of how four young, unemployed, working-class gits from the gutters of Brum donned make-up, attitude, weird clothes, and swaggered forth to escape the dreaded clutches of Birmingham's car-factory mentality by conquering the music business. On their voyage of escape and discovery, Fàshiön encounter a plethora of the music industry's sickest practitioners. Join them on their headlong flight up the stairway to nowhere as they cobble together some of the most innovative and original pop music of the time.

All dressed up with a message to send.

Take your seat & prepare to experience a crazy, madcap ride aboard one man's stairway to nowhere......but don't get too comfy! The fast pace of the first 2 chapters will leave you wondering why you never took the ride sooner.
On the surface this appears to be an honest no holds barred journey into the world of rock 'n' roll in the late seventies (early eighties), but deep down it is the story of the pain (albeit sado masochistic at times) of the music business as experienced through the eyes of Luke James – one member of the phenomena that was Fàshiön.
Packed with 'Music Biz' anecdotes (all veneered with a smattering of 'choice' language), this will entertain anyone who had the privilege of being part of the scene, & will even interest those who are too young to remember when bands actually made an effort & played instruments..... LIVE!!
Forget train sets........take a battered old van & experience a roller-coaster!!!

The Height of Fashion

What did you love best about Stairway to Nowhere?

For a fan of Fashion - the real formative Fashion, featuring the towering Luke - this book is a revelation. The band toured with a series of high profile bands on their way up (the headliners more so than Fashion) back at the height of the New Wave, and I was lucky enough to see them as an opener for the Police at a college campus gig in 1979. What an eye-opener. For me and my friends they stole the show. To this day, the classic Product Perfect is one of a handful of my favorite records from that era.

More than 35 years later, it's a pleasure to listen to the inimitable Luke narrate his account of Fashion's formative years - what was and what could have been, as it were. As an historical account and highly entertaining slice of life, the audio Stairway to Nowhere stands as an impressive performance piece even if you've never heard of the band. Luke knows how to tell a tale, warts and all, with ample humor betraying an ability to laugh at the sincerity of youth without diminishing its brilliant idealism. The story is unadulterated, and includes rather graphic snapshots of the darker side of the rock and roll experience at a time when everything seemed to be in great flux.

Luke is the star, with Dik and Mulligan in memorable supporting roles.

What does Luke James bring to the story that you wouldn’t experience if you just read the book?

Luke James reads, acts, performs in a voice and accent all his own, the perfect product of his Birmingham past and an engaged theatrical approach. He doesn't just read his story but plunges into it, even sing-telling the parts involving song lyrics. If you know the songs, it makes you want to hear them. If you don't, it should.