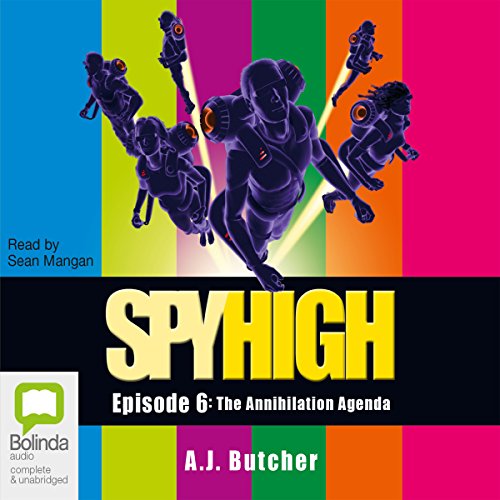 By: A. J. Butcher
Narrated by: Sean Mangan

"Bond Team", a group of super-intelligent, super-talented, super-quirky young impresarios, is assembled at "Spy High", a high school devoted to training would-be secret agents in the year 2064. Spy High is like a mix of Police Academy and Hogwarts.

Performed by Sean Mangan in a mature American voice that sounds like it could belong to Bond Team’s principal, this audiobook - The Annihilation Agenda - is the sixth and final installment of the Spy High series. It concentrates on a terrorist plot at the Solartech Power Plant which our able teens must foil...all while studying for final examinations.

The sixth and final installment in this thrilling series.

Bond Team have a lot on their minds. Not only are they about to get their exams results, they're also caught up in Spy High's investigations into terrorism at the Solartech power plant. And while Lori, Jake, and the others may be freaking out about the exams, their discoveries at Solartech are way more worrying. Because Bond Team have uncovered a plot that's going to make those exam results seem pretty irrelevant. In fact, it's going to make everything pretty irrelevant. Because humanity is about to be wiped out, and there's nothing anyone can do to stop it.