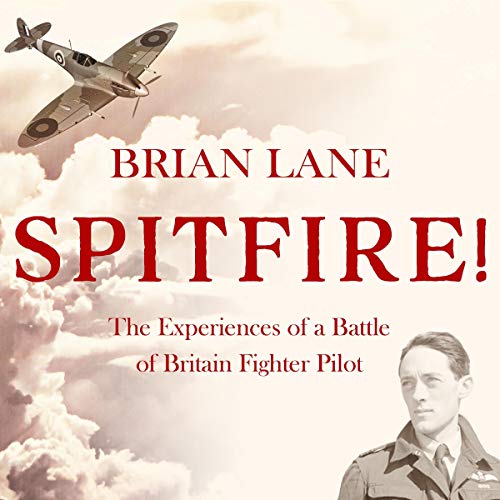 By: Brian Lane
Narrated by: William Huggins
Try for £0.00

Spitfire first became a household word during the Blitz, but it was not the first service the valiant aircraft had performed. At Dunkirk a year earlier, pilots had provided aerial support as the allied forces began their evacuation from France.

In an attempt to answer the questions of the man on the street, Brian Lane, who wrote under the pseudonym of B. J. Ellan, tells of what it is that a fighter pilot thinks and feels when he is fighting in the skies, from the sunlit coast of Belgium to the lovely countryside of Kent.

Having been with the squadron since the beginning of the war, as a flight commander and C.O., the character and bravery of the men he knew and served with are deftly rendered.

Self-deprecating and richly detailed, Spitfire! is a classic Battle of Britain memoir, and one of only a few to be published in that dramatic period of history.

What listeners say about Spitfire!

WOW!! What a book

I hate these books that witter on about Hitlers map moves, and why the Battle of Britain started. Modern experts boring and bluffing there way through selling books on already known facts. This book however is straight up air combat, written by a pilot about pilots and air combat as it happened. Just what I was looking for….not some academic bluffers point of view.

This book is pretty down to earth. This guy was no ace and it depicts the life of the average flier well. Some action. Lots of flying and not finding the enemy. Worth and listen and not too pricey.