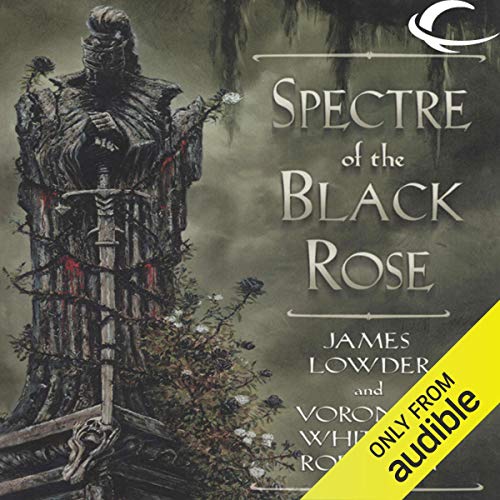 Spectre of the Black Rose

By: James Lowder,Voronica Whitney-Robinson
Narrated by: Danny Campbell
Try for £0.00

In this chilling sequel to the best-selling Knight of the Black Rose, factions vie for control of Sithicus as Lord Soth - darklord and former knight from the Dragonlance world - fights to keep his reign from crumbling. Even as he struggles to defeat his enemies, rumor reaches him that the White Rose haunts the land. Has Kitiara finally returned to Soth, or is this another spectre from the death knight's tragic past?

What listeners say about Spectre of the Black Rose

some of the best dark fantasy out there

Oftentimes, RPG franchise books are just a cash grab to lure unsuspecting nerds toward the insulting of their intelligence. However, this book, along with other selections from the Ravenloft line, do truly realize the best possibilities that the merging of horror and fantasy has to offer. It's strange, picturesque and deeply unsettling. It's as gothic as anything by Poe and as heroic as anything by Robert E Howard. That is no mean feat of writing. It comes from too far out of left field to be anything you'd ever expect. I guarantee you've never read anything quite like this. Specter of the Black Rose and Lord of the Necropolis are the finest dark fantasy stories outside of the great originators, Lovecraft and Clark Ashton Smith. Their origins as RPG novels will leave them forever underestimated.

this is not a book about soth

it really isnt. if that is what you are looking for look elsewhere. seriously. unless you like elves then go for it.

IF DONALD TRUMP WAS LORD SOTH

I read this book when I was a kid now I find the audio version 5x better because it is so amusing to imagine Donald Trump playing him. he kind of sounds like him.

I love the Lord Soth books and I wish that they would make more of them. thank you.

Was this narrated by George Lopez?

I absolutely can’t believe the choice of narrator for this book. It honestly sounds like George Lopez or Cheech reading a dark fantasy!

meh not the best book kinda hard to follow.

hard to follow the story. some good parts. lots of holes and confusing tangents. i would give it a meh.

Decent but very drawn out. More South please. Maybe one day...one day until then we all suffer the mists.

Story of a world not Soth

Most of this story was written about the world which Soth found himself in, he was more of a side character verses the main character as any book that holds him as the title should be. The over all story was good, and began to come together more towards the end. It is a good Fantasy book, but not if you are searching for a story of Soth himself as I was.