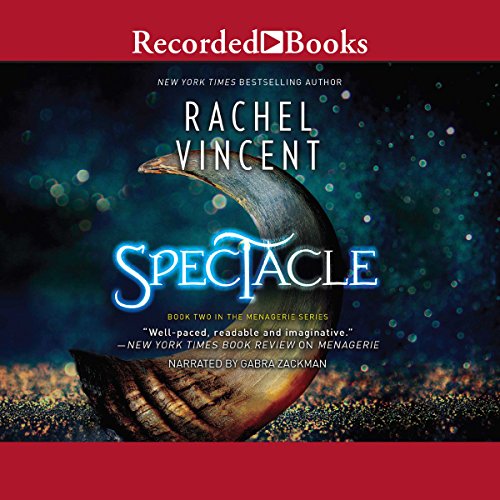 By: Rachel Vincent
Narrated by: Gabra Zackman
Try for £0.00

In this riveting sequel to New York Times best-selling author Rachel Vincent's acclaimed novel Menagerie, Delilah Marlow will discover that there is no crueler cage than the confines of the human mind.

When their coup of Metzger's Menagerie is discovered, Delilah and her fellow cryptids find their newly won freedom brutally stripped away as they are sold into The Savage Spectacle, a private collection of "exotic wildlife". Specializing in ruthless cryptid cage matches, safari-style creature hunts, and living party favors, the Spectacle's owner, Willem Vandekamp, caters to the forbidden fetishes of the wealthy and powerful. At the Spectacle any wish can be granted - for the right price.

But Vandekamp's closely guarded client list isn't the only secret being kept at the Spectacle. Beneath the beauty and brutality of life in the collection lie much darker truths, and no one is more determined than Delilah to strip the masks from the human monsters and drag all dark things into the light.

What listeners say about Spectacle

The first book was pretty cool and this ones story was decent, but I found myself getting very irritated at how helpless/stupid the characters were when confronted, making assanin decisions which somehow made a great character easy to take down with little to know effort until later when all of a sudden everyone can dodge and fight.

Was worried that it wouldn't live up to Menagerie, but damn. I was sucked in so hard that I wore headphones all day and ignored my husband as he played video games just to finish it. I stayed up late 2 nights in a row listening to it just to finish it. Probably would have finished it sooner had I not to sleep, shower and leave the house for a previously scheduled engagement. These books would make amazing graphic novels or a Starz/HBO series if done right. Can't wait for the next one to come out. May go buy a hard copy just to own for collection sake.

3.5 stars. I enjoyed the first book so much but this one kind of let me down, I wish it would have had a bit of a different plot than being abused in custody. About 3/4 of the way through the story got better but it was a little to late to warrant a better rating. The characters were still interesting and inventive. If there is a next in the series I hope the plot changes.

THAT'S NOT HUMAN NATURE, IT'S JUST NATURE
Three and a half hours in and I am so depressed, I can't continue. This is nothing like Menagerie. This book has no awe and wonder. If you have not read book one, you will be lost. Rachel fails to make me feel or care about the main character.

Production
For some reason the book is recorded at a very low level. I had to turn my radio and my mp3 player up as high as they would go. I listen to four or five books a week, every week, and it is rare for me to have to turn my devices up to the max.

Menagerie
Menagerie is a great book. Don't let my sad review of this book keep you from getting that book, it is a masterpiece, but evidently lightning does not strike the same place twice.

WHATEVER I WANT FROM YOU, I'LL JUST TAKE

this is a great series so I suggest starting with Menagerie before this one. I love the series but this was my least favorite of the three books. Not that it's bad. I just didn't realize some of the details would be needed for book three so at points I was confused. Its worth pushing through for the entire story and all three books were worth the price.

I feel like I waited forever for this sequel to come out! I listened to the first one, menagerie, again before I listened to this just to make sure I had the story straight. While I would have liked more information on what happened in the menagerie between books, because I think it would’ve been a really fascinating read… All the challenges of adaptation and assimilation from being captives to being functional sentient beings, the sequel was really good.

There was a small element of predictability, but I didn’t mind because there was enough plausible deny ability that I continue to have questions until the mystery was solved!

These characters are so rich and diverse, and well thought out. I really enjoy each one of them, and would love to go more in depth with some of the lesser characters in, hopefully, the next sequel! Let’s hope all the creatures get to be free someday!

As good as I had hoped!

This book lived up to all of my expectations. That is saying a lot because I really set the bar pretty high for this one. Last year, I picked up the first book in the series, Menagerie, on a whim and completely fell in love with the story. I immediately started counting down the days until I would be able to see what happens next in the life of Delilah and everyone else from Metzger's Menagerie. I had a few guesses about where the story would go next and all of them ended up being wrong. I couldn't be happier about that because I love it when a book really surprises me as this one was able to do.

This book picks up right after the events of Menagerie. This is a series that really should be read in order so I do recommend that readers new to the series go back and read Menagerie before starting this one. It is a great book so you wouldn't want to miss it anyway. Delilah and the gang are running the show and trying to make things work. Things are tough but they are enjoying their new found freedom until things go horribly wrong.

They soon find themselves being added to Vandekamp's Spectacle. This is not a place you would want to be. It isn't a traveling show as Metzger's was. Vandekamp's serves a different kind of customer. The exhibits are subjected to pretty much anything the clients are willing to pay for and the owners find profitable. The captives are controlled through high tech means which seem impossible to overcome.

This story proved to be incredibly exciting for me. Everything that Delilah goes through and sees in this story really got to me. I was as confused about what was happening at first as the characters were and my heart broke for them as we discovered more about what was going on. I kept wondering what was going to happen next and by the end of the book, I couldn't turn the pages nearly fast enough. Let's just say that this book definitely ends with a bang.

I would highly recommend this series to others. It is the kind of story that really makes you think about the things that people do to each other. Even though this is set in a world full of cryptids, I think that the behavior of the humans really felt authentic which makes me very sad. This is a series that has earned a spot on my favorites list and I can't wait to see what happens in the next installment!

I received an advance reader edition of this book from Harlequin - MIRA via NetGalley.

Thoughts on the Audio
I liked this book just as much the second time around. This book really makes you think about what makes a real monster. Spending time in Delilah's mind as she deals with everything that is happening to her in this new situation was very powerful. Gabra Zackman does a fantastic job with the narration.

As good as the first

I loved Menagerie and nearly didn't purchase this second book based on a few negative reviews. I am very glad I did. I did not think it was too similar to the first book. It took the story further, showed you an alternative to the circus life of cryptids, and gave us greater insights into the characters we met in the first book. As with all good books I found myself making excuses to listen and completed the book in just two days. I now can't wait to listen to the final book in the series.

Menagerie was a great book and ended in a way that looked like the second was going to be different and possibly ever better. Sadly *small spoiler* by the end of the first chapter, it becomes very much the same book as the first. The plot is not identical, but the situation is nearly the same... but missing much of the character interaction and development that made the first book a great listen. I would give the book a three, but once again it ended in such a way that the next book could be new and refreshing.

OH MY GODESS!! This book lived up to the first one and more!
My heart is still pounding in my chest! The way Vincent writes is so consuming it makes u feel as the characters do, rage, pain, love and bloodlust. I have never wanted revenge on a character more than Joffery from Game of Thrones, or Umbridge of Harry Potter until now.
I can't wait until the next book is released!